TCB At the Movies: Sugar

Share All sharing options for: TCB At the Movies: Sugar 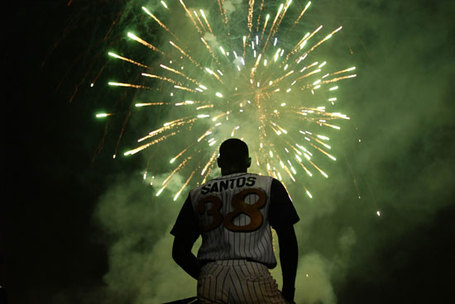 One of my favorite traditions before each baseball season is to sit down and watch a couple of my favorite baseball movies. It gets me into the spirit for a long season and helps get through that awful part of February where the spring training games haven't started, football is over and basketball goes to the All-Star break.

At any rate, last Friday, the kiddo had just gone to bed so the wife and I settled in to watch a new baseball movie, "Sugar." I had heard about this off and on since it came out, but hadn't gotten around to actually renting it yet. Someone on Twitter (I believe) said it was a baseball movie that girlfriends can also enjoy. That's how I sold the wife on it.

I have some thoughts on the movie after the jump, but I'd also like to hear from you, dear readers. Are you watching baseball movies right now as well? Should we have a weekly 'Baseball Movie Night', where we can watch a movie at some point during the week and then gather to discuss it here? Seems like as good a way as any to while the time away as we wait for pitchers and catchers to report. What say ye?

Sugar was about as interesting and topical a baseball movie as I've seen in a while. I say topical, because we've talked a lot this winter about international signings and baseball academies. Sugar, of course, deals head on with these issues by following a young, 20-year old pitcher from the Dominican Republic as he's working out at a school/academy of some kind to when he makes his professional debut in the minors.

The cultural differences were obviously what the movie tried to highlight. A guy who can be so confident and carefree with his friends in his hometown is suddenly a much tighter-wound person in the States. Combine that with a language barrier (which he slowly breaks down) and a lack of any sympathetic faces, and you get a fairly typical situation.

I assume, that is. I'm not sure how accurate a depiction this is of what a Latin American-born player must go through. It certainly makes sense, as I can definitely understand the pressure of having an entire family and town depending and hoping for your success.

Still, I think there was a little bit of the high-school-all-star-goes-to-college aspect to the story. Our protagonist Sugar was one of the best pitchers in the academy. He learned how to throw a good spike curve in a day. Going from that to the minors, where he's no longer the biggest fish in the pond, is an adjustment. Some guys can't take the hit to their ego. When you combine that with his fear that the team would cut him the moment he falters and you definitely understand his decision to run away.

One of the common draft stories you hear leading up to the big day is whether or not the guy loves the game. This is big in the NFL as well. Teams want players who enjoy what they do and don't necessarily view it as a job. Looking at a player like Sugar, who obviously enjoys carpentry much more than he enjoys baseball makes you think. He likes winning games, but the pressure he's put on himself to perform is immense. Since baseball is ultimately a game of failure, you really have to have a passion for it to make it work. Else it's much easier to do something you love instead.

We've talked about the issues surrounding international signings before and the movie highlights some of those issues. Should they be evaluated differently, in the early stages of their minor league careers? It's an interesting question, but one I don't have ready answers for.

Onto the bullet points:

Overall, I really enjoyed the movie. It was fun seeing a pitcher with a believable motion (I'm looking at you, Tim Robbins) and had a good story nestled in the baseball stuff.

Has anyone else seen the movie? Is it an accurate portrayal of what happens with international prospects?