Felipe Paulino and the Astros: To start or not to start?

Share All sharing options for: Felipe Paulino and the Astros: To start or not to start?

I don't think that there was another player who caused such a disconnect between how we here at TCB viewed the player and how the Astros front office viewed/handled the player last season than Felipe Paulino.  I can remember pacing about on a hot summer's eve chain-smoking my way through the frustration of the knowledge that six-man rotation would eventually squeeze out Paulino, and not Russ Ortiz or Brian Moehler (sadly, it's moments like that make me miss smoking).  The comments at the time expressed the same level of confusion to why the Astros weren't allowing this very talented pitcher to take his lumps at the big league level.

Thankfully, for us, Mike Hampton's shoulder flamed out and Paulino was given another attempt at the big league level. Unfortunately, Paulino continued his less than consistent way during that stretch, providing both glimmers of hope and, well, glimmers of the opposite.

The story remains the same for this endeavor: Harry Pavlidus provided the pitch/fx data and I'll try to divine what it can or can't tell us about Felipe Paulino's potential in 2010.  Hopefully we can get a true sense of just how much we should vilify the Astros if Moehler get's the fifth starter nod and Paulino get's relegated to the bullpen.

There are a few things to like, right off the bat.  Paulino's curve ball is of the 12-6 variety as there is hardly any actual horizontal break, and, relative to his fastball, the movement is still focused on a vertical change.  Aside from the amount of "hump" that is present on a curveball, relative to a fastball, being a 12-6 curve is the second most important indicator of a successful curve.  Of course, it's also his least utilized pitch, but we'll dig deeper on that subject in a moment.

Finally, there's his change-up.  The first thing to admire is that there is a near 10MPH gap between his fastball and his change-up. In terms of a pitch to utilize for southpaw, it remains a fairly effective pitch in terms of horizontal movement, but the minute drop in vertical movement, relative to his fastball, leaves it very mash-able. The most important correlate of a change-up is release point (i.e. how well it's masked), but we don't have that data to analyze.

But, we can get some better quantifications of each pitch:

And so it seems that I ranked the pitches incorrectly, according to rv100e (if you are unfamiliar with Harry's metrics, click here for definitions).  How it actually goes is (I was way off):

His slider is a sterling, whiff-weak contact-ground ball-inducing monster—apparently.  That is why it's his only above average pitch in his repertoire. It's kind of the anti-Paulino change-up.  The Paulino change-up apparently just needs to be phased out of existence before it's 37% LD%, over 1 .000 nkSLG give Astros fans an aneurysm. One has to assume/hope, though, that those gaudy numbers will come down due nothing more than regression to the mean...right? The same with his curveball, too—hopefully.
With a fairly complete understanding of what Paulino is working with, let's take a look at what Paulino got when utilized his stuff in 2009 (this is honestly the best I could make the graph viewable, my apologies for the fail). 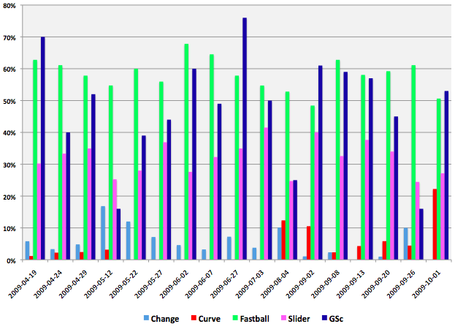 The graph above is the percentage Paulino utilized each pitch per start, plotted with his game score from that start in navy blue (I changed the game score numbers to percentages to making charting easier).  In this view, I don't really see a distinct pattern forming.  I oscillate between wanting to say that in starts where he uses his curveball less he's more successful, or the same if he uses his change-up less, but it's more complex than either of those failed observations.
Let's take a look at how Paulino mixes his pitch's by situation, not by start.  First against RHB: 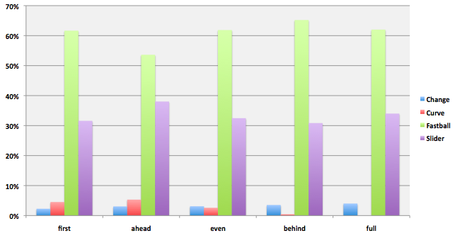 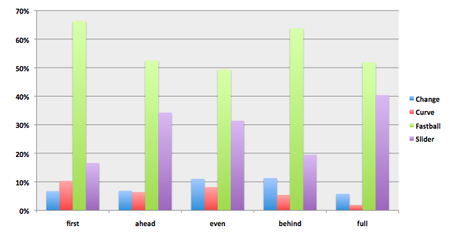 These charts, I think, reveal a little bit more about what might be felling Paulino.  Consider his rather extreme platoon split, and then splice that with our empirical knowledge of his off speed offerings (besides his slider).  Indeed, of he his truly dismal starts in 2009 (defined, by me, as a game score lower than 40), three of the five came against line-ups in which the starters were predominantly LHB or switch hitters.

Yes, it's true that I'm citing a very small sample size here, but I think it's a powerful enough insight, nonetheless. What I glean from this is that Paulino really took his lumps against LHB because he had to use pitches that clearly aren't good.  Sure, there are aspects of the pitches that indicate they could become solid pitches and give Paulino the ability to perform well enough against a line-up dominated by southpaws, but for the present, it doesn't appear that Paulino has it quite yet.

So what should be taken away from this? Well, I think the answer to the title of this post is: start him.  But I think there's more to the answer than that. Start him, but don't be afraid to utilize Brian Moehler against at team that can stack their line-up full of lefties.  The man had a reverse platoon split in 2009 and spot-starting is pretty much his only real utility, so it's a perfect combination.  For the sake of the 2010 season, there's no reason not to try and minimize Paulino's deficiencies while leaning on the few strengths that Moehler has to offer.

The final caveat I'll treat you to is that when we're considering the efficacy of Paulino's breaking stuff, let's also not forget that Paulino was coming of a 2008 season that saw him rehabbing a nerve injury.  Perhaps, then, there's reason to be optimistic that his off-speed stuff will improve has his proprioception does as well.  This is not the most likely scenario given that Paulino struggled down the stretch as much as he did in other parts of the season, but still something to churn over in the back of one's mind.