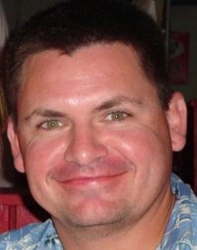 That's right, the interviewer has now become...the interviewee! Astros beat writer Brian McTaggart is linked to early and often around here and since there probably won't be a lot going on until Spring Training begins, I decided to get an interview with Mr. McTaggart.

The Astros certainly don't have the most reporters covering the hometown nine, but McTaggart has stood out as hard-working and tough. Since switching to an online format, his stories have still been insightful and, if anything, the new venue has given him better access to players and a life without deadlines.

I asked him about a wide range of topics, including what exactly a beat reporter does every day at the ballpark, what he thinks of the current team and his take on how technology is changing his job, which you can see after the jump...

The Crawfish Boxes: First, can you talk a little about your background? Growing up in Houston, going to college here, how you got into journalism?

Brian McTaggart: I grew up in Pasadena in a blue collar neighborhood and always enjoyed going to Astros games. My dream was to be a play-by-play announcer and I went to UH and majored in broadcasting. While at UH, I got a job working part time at night at the Houston Post in the sports department. I fetched faxes, made food runs and even would even go to Rockets and Astros games to get film from the photographers and bring it back to the paper so it could be developed for the paper. I was at the paper and started dabbling in a few stories, and I was hooked.

I covered high school sports for about two years until the paper closed in 1995, which was shortly after I graduated from UH. I worked briefly at the Brazosport Facts in Clute before getting on part time at the Chronicle and starting to work my way back up the chain. I covered high schools for five years, was a general assignment reporter focusing on the Rockets and soccer for one year and then covered Rice for three years. I got on the Astros beat in 2004.

TCB: Can you run through a typical day on the job during the season? What time do you get to the ballpark? How's the press box food? Anything that might be surprising about your normal routine?

BMT: For a 7:05 p.m. game, I get to the ballpark around 3 p.m. The clubhouse opens 3 ½ hours before the game, and you need to be there when it opens. I spend about an hour in the clubhouse talking to players (3:30 to 4:30 roughly) and meet with the manager for a few minutes at some point. These sessions tended to run long when Garner was manager, and shorter when Cooper was manager. Then it’s off to the field to stand around during batting practice. Often, I talk to Ed Wade near the batting cage or chit-chat with some players around the cages. You can get some really good information at these times.

Usually about 5:30, I head up to the press box and eat dinner. The press meals at Minute Maid Park are quite good, especially compared to other ballparks. And unlike what most people believe, the meals are not free! I’m usually pretty busy during the game writing a preview for the next game, blogging, Twittering and writing any stories from pregame news, so if you look up at the press box and I’m always looking at the computer, that’s what I’m doing. Trying to catch up.

I send a short game story as soon as the game ends and then go to the clubhouse and talk to the manager first and then the players and come back up and write a new story with quotes and analysis. If the game last three hours and ends around 10 p.m., I usually leave the ballpark around 11:30-11:45. As you can see, these are long days. It’s not just showing up at first pitch and leaving when the game is over. A lot goes into to our coverage.

TCB: What's been the biggest difference for you between working in print journalism to now working for an internet site?

BMT: Everything is instantaneous. I don’t worry about deadlines anymore. I’m always on deadline. If there’s news, I write it and send it in. At the paper, I’d have to write stories for the print edition and for the web sometimes, but not anymore. Plus, I really don’t have to worry about time zone changes anymore. When I was working in newspapers and I covered games on the West Coast, they didn’t start until 9 p.m. Houston time, which made it tough to get a game story into the paper with quotes because of the printing press deadlines. That’s not a problem now. I have to get a story filed 90 minutes after the game ends no matter where I’m at – L.A. or Miami.

TCB: Speaking of instantaneous news, how has Twitter impacted your job? How useful and/or interesting was it at the Winter Meetings recently? Do you like the direction it's taking 'breaking news' reports?

BMT: Twitter has changed the job tremendously. When there is breaking news, there is no faster way to get the news out than using Twitter. If I’m in the manager’s office before a game and he tells me a player is injured or gives me some other news, you can bet within a minute I’ll have it on Twitter, and I’ll still be sitting in the office talking and getting more information. A few years ago, you’d have to wait until you got back to the press box and then sent something in about the news.

It was very useful at the Winter Meetings. News and rumors were flying fast, and most were being delivered via Twitter. I’ll say this: if you’re an Astros fan and not following me on Twitter, you’re missing out!

TCB: Moving onto the Astros, what is your outlook for the club heading into 2010? What was the offseason move you liked the most? The least?

BMT: I think the Astros have a chance to be pretty good in a weak division. Remember, there is a new manager and pitching coach, so it’s hard to know what kind of difference that will make. By just looking at personnel, they’ve added Brett Myers, Pedro Feliz, Matt Lindstrom and Brandon Lyon and got rid of Jose Valverde, Miguel Tejada, LaTroy Hawkins and Darin Erstad. They will certainly lose some offensive punch Tejada, but the defense should be markedly improved and Lindstrom and Lyon could be every bit as effective as Valverde and Hawkins.

The move I liked the best was Myers. It came out of nowhere and it addressed their biggest need: starting pitching. I’m not so sure of a move I didn’t like. Ask me in eight months.

TCB: Can you talk a little about the atmosphere in the current Astros clubhouse? There are all sorts of stories about how laid back it was in the Bagwell/Biggo days. Is it still similar to that, or have things changed and in what ways?

BMT: The clubhouse remains pretty laid back. You have guys come through there from time to time with an edge to them, but pretty much from top to bottom it’s a great team to deal with.

TCB: Some of our readers have suggested in the past that GM Ed Wade has been avoiding big, multi-year commitments to players because the 2011 free agent market has the potential to be very deep plus a number of Houston's minor leaguers could debut by then. All but one of the players signed this offseason got one-year deals with options and have been generally younger options than before. Do you see this as an actual plan by the team or just Wade making do with payroll concerns and an aging roster?

BMT: Well, with three guys signed up to long-term deals that occupy half the payroll, it’s fiscally hard to take on anymore long-term deals. The Astros No. 1 priority to get young players through the farm system and up here in a hurry, because in a few years when Oswalt, Lee and Berkman are off the books, those big deals belong to Bourn, Pence and Rodriguez. And there’s no doubt they’re trying to get younger as a whole.

TCB: Do you think the Astros will be willing to let Berkman or Oswalt leave in free agency or a trade, or will they want them to finish their careers in Houston?

BMT: Drayton will try to get them to finish their careers in Houston, like Bagwell and Biggio. But these guys want to win, too, so if they see the team isn’t going in a direction they think can get them to the playoffs I could definitely see them finishing their careers elsewhere.

TCB: As you said, it seems like the Astros are pushing some of the 2008 draftees through the system quickly. Do you think this is Wade and Bobby Heck sticking to a new, more aggressive philosophy for player development, or does it speak more to the lack of depth in the farm system?

BMT: Well, it’s both. They’re going to advance players who they feel are up to the challenge, and with so few top prospects at the upper levels of the Minor Leagues, it lends itself to some quick movement.

TCB: Last question, I know journalists are usually pulling more for a good story than for a specific team. Do you have a favorite story or one you're particularly proud of since you started covering the Astros? As a baseball fan, has there been one moment you've been involved in that stands out as a personal favorite?

BMT: I guess for me it was the 2004 All-Star Game. I had only been on the beat since the start of the season and wasn’t supposed to write the game story for that game. I was supposed to write a couple of siders and then go home. Of course, there was tons of speculation Jimy Williams was going to get fired and my colleague, Jose de Jesus Ortiz, was pulled off the All-Star coverage on the day of the game to find Phil Garner. Thus, I wrote the All-Star Game lede story with the entire baseball media world in town and still have that page framed on my wall, complete with Roger Clemens walking off the mound with his head down. That was an unforgettable few days.