Share All sharing options for: Know Your Astros Relievers: The Prospects, Part II 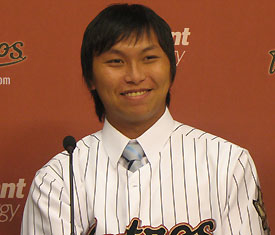 In the first part of this series, we looked at Samuel Gervacio. Next up in this little tour of the Arizona Fall League Pitch F/X data is Chia-jen Lo. Most of you are familiar with the soon-to-be 24-year old from Taiwan, but for those that aren't, here's a little background.

Lo was one of the first prospects signed by newly named Pacific Rim scouting director Glen Barker. His first experience in the minors was as a reliever in Lancaster to start the 2009 season, but the Astros wisely moved him up to Corpus Christi after just 25 innings in The Hangar. There he teamed with Daniel Meszaros to make one of the more potent late-inning relief combinations in the Texas League. The duo combined for 87 strikeouts in 100 2/3 innings, with Lo striking out 22.9 percent of the batters he faced in Double-A.
Lo then pitched in the Arizona Fall League for the Peoria Saguaros. After appearing in six games, Lo went back to Taiwan for the rest of the winter. Just last week, he was invited to the major league spring camp along with Jason Castro and a few other minor leaguers. In the AFL, however, he only had three of his six appearances before the Pitch FX cameras, which were only installed in Peoria and Surprise's ballparks. This means that Lo had just 81 pitches reported for us to analyze. So, all the jibber-jabber after the jump can be taken with a grain of salt...

At 5-foot-11 and 180 pounds, Lo isn't exactly a Stephen Strasburg look-a-like. His slight frame might remind some Astros fans of Roy Oswalt or Billy Wagner. His fastball may also hearken back to those guys when they were younger. As the chart below shows, Lo's fastball sits easily at 93-94 MPH and touches 96 at times. It's got a good bit of vertical drop to it and tails away from right-handed batters. Dealing with these sample sizes, it's hard to tell too much else, but he obviously relies on his four-seamer quite a bit.

How effective is the pitch? Well, as the next chart shows, Lo can throw his four-seamer for a strike pretty regularly. He also gets quite a few swing-throughs. If you'll recall the recent article from Harry Pavlidis that HLP linked to last week, a 14% whiff rate is about half what the minor league leader had in 2009. It's good, but it's not great.

Of course, we are again dealing with a much smaller sample size than Pavlidis obtained for any of the pitchers on his list. It is good to know that Lo is getting some swings and misses with his fastball, especially if he decides to throw it as often as he did in the AFL.

One of the big knocks on Lo once he was promoted to Corpus was he lost a little control. As you can see, that may have been because of his curveball. The curve was his second favorite pitch in the AFL, but he still threw it less than 20 percent of the time. It has good break to the bottom of the strike zone, but it's hard to determine how good a pitch it was due to him throwing just 14 of them. Still, he only managed to get seven of those over for a strike and didn't get a whiff on one of them. That seems to indicate he has trouble spotting the pitch, which may have caused some trouble for him at the higher level.

If you want to see visually what his pitches look like from a break standpoint, here's a nice scatter chart for that. Look at this reference guide to see that some of those four-seamers have movement very similar to his two-seamer, and could almost fit into the category of a changeup. If Lo could master the change in addition to his fastball, he could be a lights-out reliever. 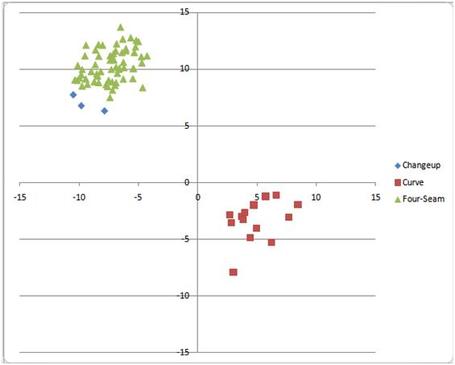 The last thing I wanted to look at was Lo's release point: 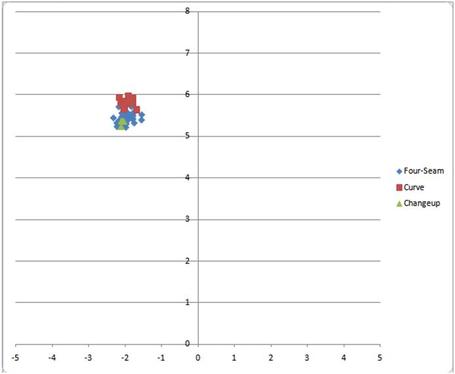 As you can tell, Lo definitely comes more over the top than Gervacio did, but it's still not all the way over. His delivery is right there in an easy 3/4 slot and seems to be very consistent. You'd like to think he gets more over the top on his curve, but that's probably just a sample size issue.

So, what does this all mean? Lo is a talented right-hander with a great fastball who needs to work on his secondary stuff. Developing more consistency on his curve or developing a good changeup are both easy ways for him to make the big leagues. There was some talk about making him into a starter last season. However, he needs more than the pitch arsenal he's got currently because he's not going to fool many big leaguers throwing his fastball 75 percent of the time. I'll be very interested to follow him this spring to see what kinds of pitches he's throwing then. What does everyone else think?