Share All sharing options for: Digging deeper on what Bud Norris can offer the Astros in 2010

*****My apologies for the sloppiness that was my handling of this post.  In it's draft form, it managed to grace the front page here twice.  C'est la via, though.  Also, stay tuned to the Felipe Paulino addition that I'll get done at some point (hopefully it doesn't take me two weeks like this one did)*****

Throughout the first half of the summer, we were all a buzz about Bud Norris and his dominance of the PCL.  When the Astros finally started to jettison their corps of reclamation projects in late July, Bud Norris, who had earned his call up, made his debut.  His first official big league start against the Cardinals was easily in my top three most anticipated games to watch in 2009.  Perhaps more so than any other Astro in their lineup, Norris' 2010 performance will be the harbinger of how this team will fair.

His projections and advanced metrics have already received their warranted attention here, but there is one tool that's yet to be fully employed on Norris: pitch/fx.  Since Harry Pavilidus, SBN's resident pitch/fx guru, had already done some probing into what the latest and, in my opinion, greatest sabermetric tool available could allow us to infer about Bud Norris, he graciously provided me the raw data he had available.

What we know about Norris can be summed pretty quickly in a few stats: 4.38 xFIP in 2009, a projected FIP of 4.37 from Bill James, and a 4.43 projected ERA from CHONE, and a K:BB that either projected or from 2009 sits just above two (2.03 K/BB CHONE - 2.16 K/BB 2009).  He's an above average strikeout pitcher that struggles with his command, and the latter is likely why all of the advanced metrics I just quoted fall below his ERAs—real or projected.

Those numbers, though, are pretty macro.  With pitch/fx, and the people like Harry who are working with the data, we can meld that macro knowledge with more nuanced information gleaned from the actual repertoire of a pitcher.  Formerly only the domain of seasoned scouts and pitching coaches, pitch/fx provides the kind of detailed information about how a pitcher pitches that our eyes just can't ever pick up on.

After the jump, we'll take a look at what the pitch/fx data that Harry provided can tell us about what Bud Norris might be doing for the Astros in 2010.

The first thing about Norris' repertoire that jumps out is that he has a distinct platoon approach.  Below are a few graphs that illustrate Norris' mix of pitches broken down a few different ways by platoon.

First, Norris' selection based on the pitch count.  As you can see, Norris is pretty dependent on his fastball and slider. His change-up is selectively used, and almost exclusively just against left-handed batters. 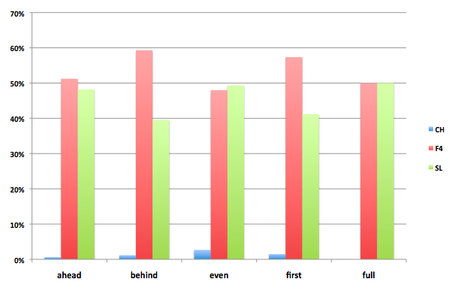 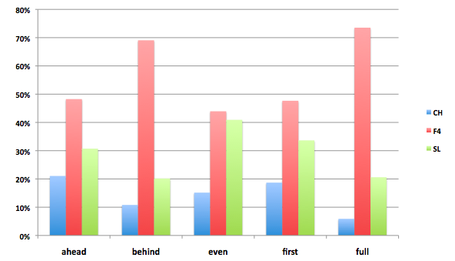 Sandwiched in between the next two pitch/fx graphs is a charting of Norris game score by start. This corresponds to with the break downs of Norris' percentage breakdown's by start.  The idea is to see if there's a discernible pattern. 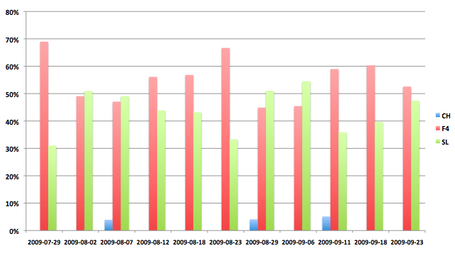 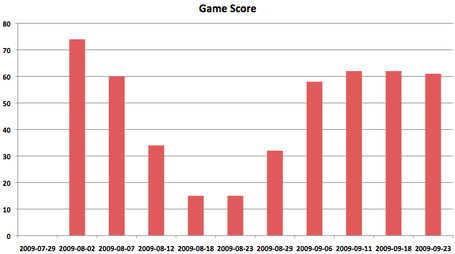 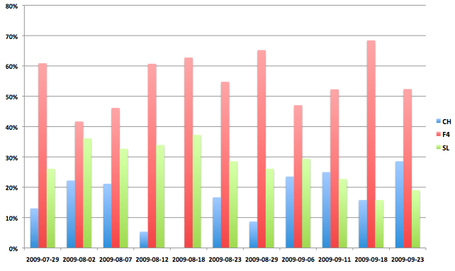 I don't discern one.  But perhaps someone out there might pick up on something that I missed.  I'm moving forward, however, with the assumption that it isn't Norris' mix of pitches that impact his performance, both rather something about their actual quality, or perhaps even...luck.

A bold assumption, some might be thinking.  Luckily, I had already looked at all the data before I tried to start making sense of it with Mr. Norris.  For those of you aren't familiar with all of Harry's proprietary stats, or who don't remember the Brandon Backe piece from this summer, here's a quick refresher on what some of the stats you're looking at mean:

A newer stat that Harry has added to his repertoire is rv100 and rv100E.  rv100 is pretty simple.  It's the actual run value of a pitch per one hundred pitches thrown.  rv100E is interesting.  Tied to the broadest of truths from DIPS theory, Harry is regressing the outcomes of batted ball types by one hundred percent to their three year league average (i.e. the stat assumes that a pitcher has zero control over the outcome a batted ball, but 100% control over the type of batted ball allowed).  Harry admits that these are flawed assumptions, which they are, but they do key on certain truths of about how pitchers pitch.  For both measures, a negative value is better for a pitcher.

Immediately, your eyes should dart tot he lower right-hand corner and the thought you should register is, "Holy crap his fastball is bad."  That should be followed by, "But wait..."  That but wait is because Bud Norris appears have experienced some bad luck with his fastball; the pitch he threw fifty-five percent of the time last year.  OK, Norris seems to have experienced a TON of bad luck with his fastball.  One need not look farther the nkSLG column to see why.  Hopefully, Norris can either up his Whiff rate on the pitch...or hitters will just stop hitting the crap out of it. Indications are, though, that the latter should occur.

Surprisingly, Norris' change-up should be less effective than it is, in spite of its strong seven-mile per hour gap, which is one of the most important aspects of the change-ups effectiveness.  However, I guess the effect isn't all that important unless Arnsberg is going to have Norris work his change-up more.  In the end, the thing to be thankful for is that Norris' rv100E indicates that he should be in the negatives; or he's an above average pitcher.