This was the kind of game I wish I could have seen, but such are the perils of being an Astros' fan that lives primarily outside the city of Houston. Mr. Norris allowed two runs on two home runs, one by Jimmy Rollins to lead off the game, and another by Ben Francisco in the fourth inning. Besides those taters, Bud scattered four hits over his six innings of work, while not walking a batter and striking out six Phillies. It appeared on Pitch F/X that he was keeping his pitches down in the strike zone much better and threw strikes on a consistent basis. It was refreshing to see his change up mixed into the gameplan effectively, throwing it around the strike zone and keeping hitters off balance. The best part, perhaps, of this game was Bud not having to extend himself. He threw 73 pitches in six effective innings. Philly swung and missed at nine of those pitches, showing that he was fooling hitters in a way that really only power pitchers can.

Offensively, Miguel Tejada collected four hits including two infield singles. Hustlin' when your club is 15 games out. Thank you, Miguel. Mike Bourn stole a base each of the two times he was on, and was knocked in along with Kaz Matsui on a Carlos Lee single in the sixth inning. That hit would prove to be enough for the Astros, as they won their 3rd consecutive game against the leaders of the NL East.

Pitching, pitching and more pitching has been the key of late. Wandy, Roy, and Bud in back to back to back performances have really been all we've needed. Their combined K:BB ratio in the series has been a staggering 21:2, giving the bullpen a break and filling the home park with glee. Of all the inconceivable events of the 2009 season, sweeping the Phillies in September would be the most pipe-dreamish of all. The opportunity is theirs for the taking tomorrow afternoon. 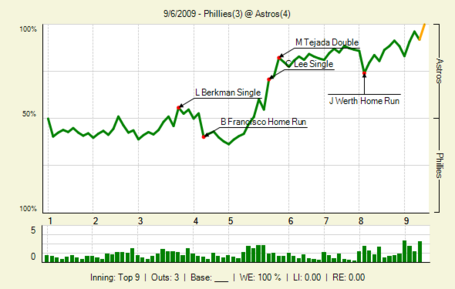