All around effort helps the Astros take the series: Pirates 2 - Astros 4

Share All sharing options for: All around effort helps the Astros take the series: Pirates 2 - Astros 4

Brian Moehler had another solid outing, which continues to frustrate just about everyone who wanted to write him off at some point or another during that last two years.  His line of 6IP, 2R (2ER), 4K, 3BB, 101 pitches (59 strikes), 13 GB, 3 FB, was a standard Moehler effort.  With defense and offense both coming through for him, Moehler secured a win en route to the Astros clinching a series victory over the basement dwelling Pirates.

The win pulls the Astros within one game of .500 and thirteen wins away from meeting our Community Projection Project projection of 83 wins.  That's a tall order, but realistically, if the Astros can finish at .500, I think many of us here will count that as a moral victory.

Before the game, Greg Lucas tweeted that were it not for the rain, the Astros would have played tonight's game with the roof open.  With the NFL set to get underway in full tomorrow and the thermostat dropping, opportunities to revel in Astros victories are coming to a close.  This is a sad, sad realization.  Even mediocre-to-disapointing baseball is better to watch than no baseball.

Both Carlos Lee and Miguel Tejada went yard tonight.  It's nice to see Tejada notch a HR just because I am beginning to sense that he'll be our regular 3B next year, so whatever power he has left in his bat, hopefully he can produce it for us at the hot corner next year. 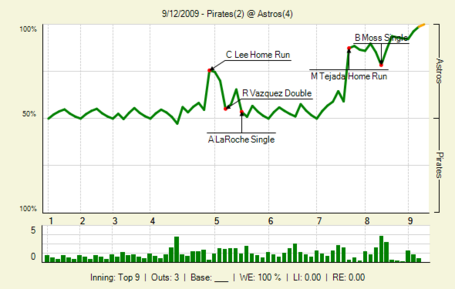