Friday Morning Astros, etc Round Up

Share All sharing options for: Friday Morning Astros, etc Round Up

In case y'all haven't noticed, Lance Berkman and Roy Oswalt haven't exactly been themselves in 2009. I mean, they haven't been terrible, but each has left a little to be desired. Zach Levine gives us the optimist and pessimist perspective on each in his blog post yesterday. More than their diminished performance this year, I'm worried about their attitudes towards their futures in baseball and the Astros in the immediate future. Maybe it's just that I'm used to Astro players keeping quiet for the most part, but Lance nor Roy have come out sounding excited about playing baseball. It's a grind when you're out of the race, and it's natural to let down when you have "nothing" to play for. Perhaps a free agent signing or strong performance by a youngster (or five) will lift the spirits of our longest tenured Astros?

Our minor league affiliates named their team MVPs, and I can't argue with the selections from AAA, AA or A. Round Rock chose Tommy Manzella, Drew Locke earned the honor in Corpus, and Koby Clemens was rewarded in Lancaster. The Lexington Legends' team MVP is Brian Pelligrini, but it's more than likely that a pitcher (Jordan Lyles) was truly the most valuable member of that squad.

RJ's twitter feed informs us that five Astros have made their major league debut this season: Bud Norris, Wilton Lopez, Sammy Gervacio, Tommy Manzella and Chris Johnson. This type of factoid is common for most teams, but for the Astros it's downright nutty! Taking these five, plus Felipe Paulino, Michael Bourn, Hunter Pence, Wes Wright, Alberto Arias, and Yorman Bazardo into account, 2010 could be an extremely telling season in terms of whether or not this team is going to be competitive in 2011 and beyond.

The Astros may have lost last night, but Chris Johnson will always look back fondly on the game as the night he notched his first big league hit. Congratulations to Chris. Now Tommy Manzella needs to get his chance to do the same. Perhaps a Miggy at third base, Tommy at shortstop starting lineup is in order?

It's always fun when the big baseball websites take note of the successes of our minor leaguers, and Baseball Prospectus did just that on Wednesday in an article which analyzed the minor league leaders in various categories. Jon Gaston led the minors in HRs, and was given the usual assessment of being fortunate to play in a bandbox, and striking out too much. Koby Clemens apparently led the minor leagues in RBI with 123:

One of the bigger surprises of the year, Clemens hit .345/.419/.636 for the JetHawks, and while the ballpark and the top of the Lancaster lineup did wonders for his RBI total, this is at least some kind of step forward. He'll need to prove it's for real next year at Double-A, and his catching still needs a load of work, as in 66 games behind the plate he was charged with 18 passed balls while throwing out less than 30 percent of opposing basestealers.

Maybe he and Jason Castro can get together, and Koby can pick Jason's brain?

In their first World Cup game, the U.S. team lost to Venezuela in a slugfest, 13-9. Jason Castro managed to go hitless in five at bats, but was probably worn out from crouching so much. He looks swell in his Team USA uniform though: 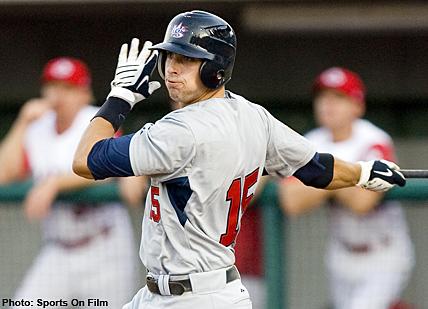 Remember when Dice K mattered? I barely do. He's coming back for the stretch run though...so take heart, Boston?