Miguel Tejada can't do it two nights in a row: Braves 9 - Astros 7

Share All sharing options for: Miguel Tejada can't do it two nights in a row: Braves 9 - Astros 7

He did it.  Yes that's right, Lance Berkman ended an interminable stretch of homerlessness in what was really a really poorly pitched games.  I'll just thank the baseball gods for allowing Lance Berkman to drive one out of the park again—finally—because it was negatively impacting me in a facets of baseball life (fantasy included).  Even though there was some controversy surrounding the blast, with the wait lifted of his shoulders, maybe the Puma will feel compelled to make up for lost time in the next three weeks; could be fun. It, unfortunately, wasn't enough for the Astros to overcome poor pitching by perennial ace, Roy Oswalt.

Lance helped make it interesting by singling up the middle to start the bottom of the ninth.  After Carlos Lee's grinding PA resulting in a free pass from Mike Gonzalez, Miguel Tejada found himself in the drivers seat again.  Sadly, his game ending GIDP didn't result in the post game hysterics of last night.

Roy Oswalt struggled.  Perhaps the nine runs that the Braves hung on the board didn't give that away.  If that's the case, this line should help elucidate it: 2IP, 10H, 6R (6ER), 5K, 1BB.  Outside of the aberrantly odd peripherals you can derive, it was clear that something just wasn't right with the Wizard.  My gut tells me that it will be many months before I see the comforting image of Roy Oswalt on a mound.  As sad as that is, with performances like that—and risks of seeing continual images of grimacing-Roy grabbing his back—there's just no reason to risk 2010 Roy.

Other highlights from tonight: 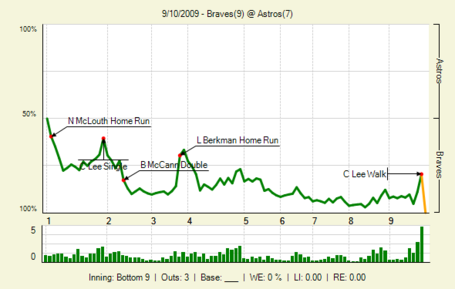