On a night that saw Mike Hampton make an early exit from the game and head for an MRI machine, Astros fans got a chance to see Yorman Bazardo's debut in an Astros uniform go...not well.  Cecil Cooper's quote pretty much sums it up (and apparently takes the heat off Bazardo, but if I'm Bazardo, I'm not too comforted):

I talked to the young man, Bazardo, about not pitching today and we got into a situation where we needed him. He sucked it up.

The positives from tonight are Ivan Rodriguez, Chris Coste, Jason Michaels, Kaz Matsui, and Carlo Lee, who finally collected career home run number three hundred (congrats big guy), having multi-hit games, and Wesley Wright going three innings and only giving up one run.  The picture will fill in the rest of the story that isn't so cheery: 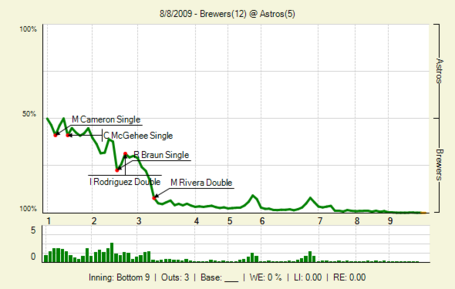