Hey there, consecutive games where the Houston Astros are victorious.

Matt Cain tried to get in our way. He's a naughty little guy, isn't he? Pitching well for the most part, showing why he's an All Star and what not..

Then a funny thing happened. Out of nowhere, Geoff Blum knocked a solo shot to right field in the fifth inning. Then, Mike Bourn tripled to lead off the sixth and scored on Kaz Matsui foul pole home run.

Want some insurance? Sure ya do. With two outs in the eighth, Hunter Pence tripled to deep right center and Carlos Lee was Johnny on the spot with a RBI single. Cain was very good for the most part- hell, he pitched a complete game, but the Astros persevered.

Mike Hampton was very good. He did allow eight hits in six innings of work, but he struck out six and induced 13 ground ball outs. With the likes of Yorman Bazardo possibly breathing down his neck, Bulldog came up huge.

This was a game that the Astros probably should have lost, especially considering the matchup of starting pitchers. Still, today's outcome is one you can (as one commenter from the game thread noted) stow away in your back pocket for the rest of the season. So when inevitably the Stros blow a game to the Pirates or Reds, we can say...well, we DID win that one against Cain back in August.

Today's game reminded me of the series against the Cardinals two weeks ago- the Astros matched the Giants pitch for pitch, and then struck when the opportunities presented themselves. A reversal of recent fortunes to be sure. 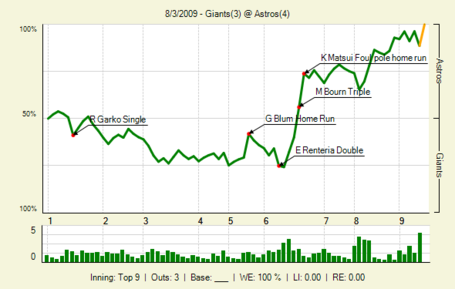