Share All sharing options for: Wandilicous pitches the Astros to a series victory (and a winning streak)

Winning streaks, I had forgotten they existed.  While you have to give credit to Hunter Pence and Carlos Lee for their home runs, when Wandy Rodriguez delivers 8IP+ of one run pitching and an RBI 2B...it was Wandy's night.

Wandy's final line was 8IP+, 1R, 7K, 2BB, needing only 103 pitches (70 strikes!!).  His efficiency is captured in his peripherals: 7.88K/9, 3.5K:BB, and 6.79K/100.  Were it not for the jam he got himself into to start the 9th, Wandy would have been able to complete this game to make it second career CG.  Regardless of having to bring Jose Valverde in to give Astros fans another near collective heart attack, Wandy was dominant.  Outside of the numbers, the postive from tonights game is that even though he had a shaky first inning, Wandy bore down and cruised through the next seven. More importantly, he snapped the Marlins historic fifteen game streak of 10 hit games (yes, the Astros helped them in five of those).

Here's to a winning streak.  Until tomorrow, marvel at both Carlos Lee's ridiculously crushed home run and this WPA graph (maybe we can win one soon that doesn't have the dip in the ninth inning): 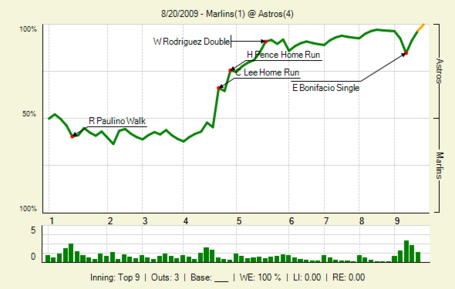