Astros win the most uncomfortable 6-3 game—ever

Share All sharing options for: Astros win the most uncomfortable 6-3 game—ever

After being way prematurely yanked to satisfy whatever rumbling was occurring in Cecil Cooper's gut, Yorman Bazardo was removed and lost a shot at being the pitcher of record.  I was looking for Bazardo's start to make me feel good about our prospects in 2010 and Yorman did little to let me sleep well tonight: 4.2IP, 6H, 2R, 2ER, 1K, 4BB using 95 pitches (maybe 98, there's some controversy).  That's a 1.93K/9, 0.25K:BB, and a paltry 1.05K/100.  Not exactly what I was hoping for.

To say that Bazardo lacked control would be an understatement.  At times he flashed crisp fastballs and an excellent slider/change-up combo and others he had an inability to keep his fastball down and his breaking stuff in the zone. The one positive I can laud Bazardo with is that he managed to work his way out of jams and limit the damage.  In fact, he should have been able to complete the full 5IP were it not for Kaz Matsui bobbling the ball on the exchange of botched GIDP.  Coop went with Tim Byrdak who managed to continue not being effective against lefties without Coop catching on.  Instead of allowing Byrdak to pitch to RHBs, who he's actually more effective against, Coop went to Samuel Gervacio who needed five pitches to collect the third out...something that would earn him the pitcher of record nod (reason #583958277134 that wins are meaningless).

Jeff Fulchino, LaTroy Hawkins, and Jose Valverde all combined to finish off the Marlins, who still collected over ten hits for the fifteenth consecutive game.  Valverde, however, continued his streak of having a total inability to just go get three outs without giving an entire city a collective heart attack.  With two outs, Valverde decided to walk two batters, then hit Wes Helms.  After an eleven pitch battle with Chris Coghlan, Valverde recorded the K and the final out.  He has got to stop doing that.

Here are the positives from the offense: 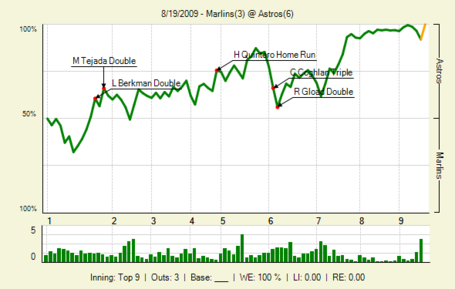