Bud Norris's fastball velocity: Should the Astros be concerned?

Share All sharing options for: Bud Norris's fastball velocity: Should the Astros be concerned?

In the last month, there's probably been nothing more postive for the Astros than Bud Norris's MLB debut.  His first start against the St. Louis Cardinals saw Norris throw seven scoreless innings accompanied by a 5K, but also 4BB. With as much of a discussion as Norris's usage has prompted here at TCB, I decided to look into one of the key indicators of fatigue in a pitcher to see if there is cause for concern as his IP total continues to climb.

So far the Astros have certainly limited his total number of pitches per start, but the key is how many pitches per inning Norris is throwing in each start.  Thus far, Norris has averaged 13 P/IP, 17.5 P/IP, and 19.6 P/IP.  With the exception of his last outing in Florida, Norris has been rather efficient with his pitches and there have been very few fatiguing innings (my recollection is that the average number of pitches per innings is right around 16).  However, we now live in the pitch/fx age and we can extend the conversation about injury risk and fatigue beyond innings and pitches.

The following table contains Norris's fastball velocity, by start.  Each date contains a link to the Brooks Baseball pitch/fx tool where the data was pulled from.  I mention this, because there is wealth of data available there that might make for other interesting observations that I won't touch on here.

To put that data into a cuter, visual format, here's FanGraph's velocity graph (the additional data point is from Norris's 7/29 relief appearance against the Cubs): 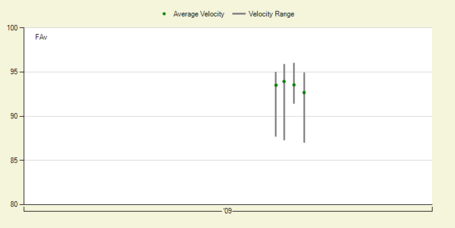 Obviously this is a small sample size, but there is a slight decrease in Norris's fastball's velocity in his last start against the Marlins, his least efficient outing.  Is this cause for alarm? Likely no.  But that doesn't mean things like this shouldn't be watched carefully.  Having posted a 3.83 tRA and a 4.47 xFIP, Norris has demonstrated himself to be capable of being a number three caliber starter; something the Astros will desperately need on the cheap in 2010 and for the rest of 2009.  As we all watch Norris take the mound tonight, perhaps we should keep an eye on his fastball's velocity.