Astros bats snap out of their slump: Astros 8 — Brewers 5

Share All sharing options for: Astros bats snap out of their slump: Astros 8 — Brewers 5

On a day when things just didn't seem to be breaking right for Roy Oswalt, Geoff Blum and Hunter Pence both went deep to bail the Wizard.

Although the Brewers managed to hang five earned runs on Oswalt, Roy managed to accomplish something that no other Astro starter managed to do this entire road trip: pitch longer than five innings.  His final line: 6IP, 5R, 5ER, 5K, 2BB needing 94 pitches to get there.  While not the most dominant or most efficient outing, just seeing a starter go longer than 5IP was nice.

With an off day tomorrow and Bud Norris starting on Tuesday, hopefully the bullpen can rest their weary arms and the Astros can think about writing the ship. 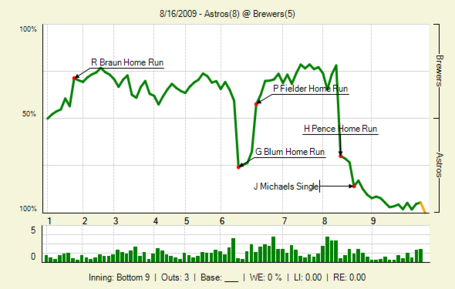