Ricky Nolasco didn't know what was coming his way tonight, but it took him less than three outs to figure it out.  On a night in which every Astros starter got a hit save Miguel Tejada, Lance Berkman's return was received well by the rest of the 'Stros in the line up.

With the Astros lead never truly in doubt, the story that was interesting to me was how Bud Norris would respond to a four run lead, and the subsequent support that the Astros gave him.  HIs defense independent pitching stats tell the story of a pitcher who was dialed in: 5 IP, 6K, 1BB, 10.8 K/9, 6 K/BB.  The Marlin's bats were all over him at the plate however, resulting in 10H and 5R (4ER)which drug down his efficiency—evidenced by a 6.12 K/100.  Make of it what you will, but I was disappointed that 98 pitches only got Norris five innings deep.

As for the offensive explosion, I could go on for lines, but pictures are worth a 1000 words: 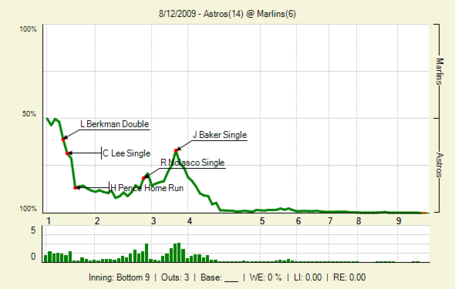