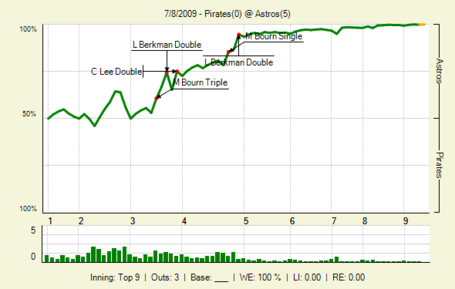 That's my kind of game board. A game that the Astros had in hand seemingly the whole way. Wandy escaped his biggest threat in the second when he struck out two batters with two runners on base. From there, Michael Bourn, Carlos Lee, Miguel Tejada and Lance Berkman did the rest. Mr. Rodriguez pitched a complete game and lowered his ERA below 3.

The Astros are now 5-3 in July, and have once again moved within a game of .500. Tomorrow the team will complete the suspended game against the Nationals at 6 pm, and then play their regularly scheduled game half an hour after the finish of Game 1. Five games against the worst team in baseball await the Astros before the close of the first half of the season. Opportunity to both move above .500 and ahead in the standings is staring the team in their collective faces.