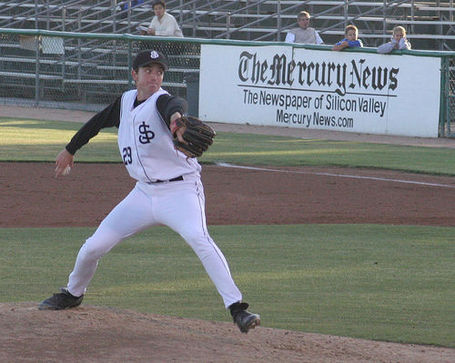 Looks like your average, ordinary youngster who has made one career major league start, and a fine one at that.

Nope. First of all, Sadowski is a lucky man. Not only to be a professional baseball player, but to be alive, after having brain surgery in 2003. At 26, I'm sure that he appreciates his time in the bigs more than most guys his age.

This is a nice story, and obviously it's awesome that Sadowski recoupperated to the point where he is healthy enough not only to resume a normal life, but to be able to pitch.

For three hours tonight though, the Astros are going to do everything they can to make his life miserable. I guess it's all relative- someone who's gone through what Sadowski has probably has a different perspective on "miserable".

Our own youngster, Felipe Paulino, will take the hill tonight. Backing him will be this lineup (per Alyson Footer's Twitter page):

How many times this season have the Astros been at/above .500? If you answered once, grab a gold star/piece of chocolate/handfull of goldfish crackers.

I wanted to give props to Joe in Birmingham for coming through with a gamethread yesterday. DQ wasn't able to post one, and I was not near a computer, nor was my cell phone with me so I could respond to DQ's text asking for help posting one. My bad, ladies and gentlemen. Let's get a win tonight! - Evan