It's a Holliday in St. Louis

Share All sharing options for: It's a Holliday in St. Louis

The Cards won their first game with Matt Holliday in tow last night, 8-1 over Philadelphia. The newly acquired left fielder went 4/5 in his debut and has given his club a nice pick me up after a series sweep here in Houston.

How much will this deal matter in the short and long runs? Well, in the short term it is a trade that may provide a little bit of cushion for St. Louis. All of the NL Central teams are flawed, some more than others. The Cards are on top now, but I seriously doubt that Chicago will not make a strong push for first at some point in the second half. They are the team that is able to string high OBP hitters consecutively throughout their lineup, something that will be crucial to winning games against already worn out pitching staffs. Milton Bradley and Alfonso Soriano have track records that indicate they are going to come around and perform as they have in years past. Again, both guys are locked in to big contracts that are probably over priced, but hey- we have Carlos Lee. Pitching wise, Chicago has been excellent. Power arms out the 'pen, and the emergence of Randy Wells have been pick me ups for the offensive challenged North Siders.

Yes, St. Louis made the first big move of the deadline season. Can you blame them? The troika of Chris Duncan/Dick Ankiel/Rick Stavinoha probably wasn't good enough to win even the mediocre NL Central. The previously mentioned Soriano, Milwaukee's Ryan Bruan, and our own Carlos Lee are top of the line run producers and hitters in general. St. Louis can now boast their own powerful left fielder. A return to the NL, and leaving Oakland's pitcher friendly park specifically, should improve Holliday's outlook and performance. His production has slipped in recent seasons, but a .370 wOBA isn't anything to turn your nose up to. Patience is a virtue, but Holliday has seen his aggressiveness at the plate deminish, at least in terms of overall swing percentage. His walk and strikeout rates have improved since his spectacular 2007 season, but that's about it. Taking everything into account, I think Holliday adds about 2 wins to the Cards 2009 total, whatever it ends up being.

Brett Wallace, the centerpiece of the prospect group sent to Oakland, was not a good fit in the St. Louis organization. A pear shaped third baseman is not exactly ideal, and with that Pujols character manning first base from here to eternity, Wallace was probably going to be traded at some point anyways. Like Jason Castro, Wallace was drafted in the first round of the 2008 draft and has sky rocketed to the Cards' AAA affiliate in Memphis. Just a year after using the metal bats, Wallace has developed his offensive game to the point where he seems nearly major league ready. Think of him as Kevin Youkilis-lite.

Whatever your take on the trade is, Matt Holliday makes St. Louis a better team than they were leaving Houston on Wednesday. TLR and crew may regret the move in 2010 and beyond, but for now it's a two month Holliday in St. Louis.

Oh yea: what number is Holliday on this Cards team? Well, he took the number after it had been used in the recent past by another outfielder: 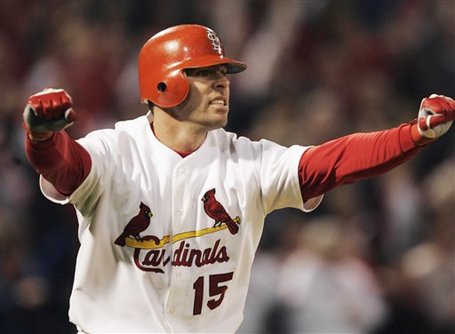