As Jose Valverde took the mound to begin the ninth inning, the Mets' offense hadn't gone down in order since the fourth. A shaky effort by starter Mike Hampton was followed by Jeff Fulchino, Alberto Arias and LaTroy Hawkins walking the tightrope as well. Luckily for all involved, sixteen Mets were left stranded on base, while just four crossed homeplate. Oh yea- Valverde ceased all the drama, retired the Mets easily, and preserved a 5-4 victory.

Mike Hampton may have struggled at times on the mound, but in the batter's box he more than made up for it. With the score tied at one run apiece in the fourth inning, Hampy stepped to the plate and drove a Johan Santana offering into the Crawford Boxes, pushing the Astros ahead for the first time all game. Jeff Keppinger continued his strong recent play, knocking a two out double immediately before Hampton's long ball.

The lead wouldn't last long, as the Mets stormed back with a two spot of their own in the fifth, keyed by a Jeff Francouer bloop RBI single that fell just in front of a diving Michael Bourn. Chris Coste picked up the two out baton from the newly acquried Met and ran with it, to the tune of a RBI double which scored Hunter Pence and Pudge Rodriguez..

An Omir Santos solo shot in the sixth inning closed the book on Hampton's day. He wasn't great, but he kept the Astros in the game. The bullpen made it interesting; fortunately, between two good defensive plays by Hunter Pence and Carlos Lee, as well as the stellar ninth from Valverde, the Mets were not able to cash in their opportunities. Alls well that ends well. 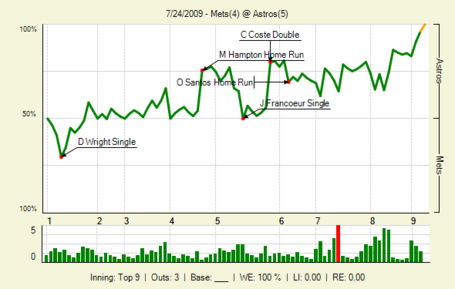