TCB Drops Five Tid-Bits of Astros Knowledge On Ya

Share All sharing options for: TCB Drops Five Tid-Bits of Astros Knowledge On Ya

After a stunning victory last night to square up the season series between the Cardinals and the Astros—and secure a series sweep—we're presented with an off day to kick back into neutral before the Mets bring Johan Santana to the bump.  Instead of worrying about whether Lance Berkman's calf will be better or cringe at the thought of Mike Hampton being Santana's mound opponent, here are five tid-bits for you to roll around in your mind instead:

1. We like to criticize Cecil Cooper around here. Well, it's not so much that we like to criticize him, it's just that he deserves to be criticized based on some of the decisions he makes. My whole theory on managers is that the decisions they make during the season pale in comparison to the decisions of the GM from November-March. Seasons are won and lost in the offseason. Managers can set the tone for a team, and keep players motivated, but for the most part, a player is who he is, and that's that. If anything, managers through their decision making usually cost their team chances at winning, and Baseball Prospectus agrees.

After re-reading a chapter of Baseball Between the Numbers that dealt with the importance of managerial decisions, they included a chart that laid out the best ML managers from 1972-2004, based on strategies (hit and run, sacrifices, intentional walks, etc). Their conclusion was that in the thirty three seasons covered in their study, "only six times did any manager use sacrifice attempts, stolen base attempts and intentional walks to increase his team's win expectation over an entire season." Even the great managers cost their teams a handful of games in most any given season.

Larry Dierker is no exception, but during his five seasons as the Astros' manager, he did a relatively good job of limiting this negative effect. In fact, Dierker ranks 10th on their list of the all time best managers from 1972-2004:

Dierker had many a good team during his time as manager in Houston, and didn't do much to take away from that talented group.

2. Perhaps my post last week about Carlos Lee's sudden power outage was premature. In the past two games, Carlos has 2 home runs, and seven RBI. He has 15 career grand slams, ranking him in the top five for active players. With Lance out today, and most likely the first game against the Mets, Carlos, Miguel and Hunter are going to have to continue to do what they did last night- take advantage of Matsui and Bourn getting on base by knocking them in.

Speaking of Mr. Lee, check out his various batting splits over the course of his career. This has been pointed out before, but he is incredibly consistent in most any situation- late inning, 2 outs, no outs, down by four, down by one- it doesn't seem to matter. He isn't a super star, but he is a helluva hitter.

3. Awesome Picture of the day: 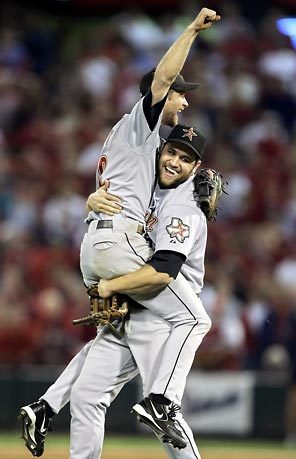 Is it too much to ask for this picture to repeat itself this season? I dunno if Lance can lift Miggy Tejada as easily. I could definitely see Mike Bourn taking the place of Adam Everett.

4. As I was watching Baseball Tonight on Tuesday evening, (and yes, I did get a slight headache from listening to John Kruk for an extended period of time) former top of the order-man Fernando Vina did a segment on how Michael Bourn's ability to be a viable leadoff hitter is what separates the Astros from the Cardinals and Cubs, at least in his mind. Here are the leadoff men for the Astros, Cards, Cubs and Brewers, and how they stack up against each other. (Even though Felipe Lopez was just acquired for the Brew Crew, I threw him in there):

Vina was right in asserting that Bourn was the best out of these players, but not by much, at least in the cases of Fukudome and Lopez. I realize that Fukudome hasn't been the Cubs' leadoff man for long, but I'm assuming that he will be down the stretch. For what it's worth, Vina did mention stolen bases as a big part of why he liked Bourn, and he is clearly the best of this group, and most probably the entire NL, in terms of base stealing.

Pulling above .500 as a franchise would kill two birds with one stone for the Astros.  Coolstandings.com's play off odds report (the only service to have updated for 07/22/09's action at the time this was set to publish) has the NL Central being clinched by 84-85 wins, so 86 would put us in a strong position to not only make the postseason, but also make this franchise a winner in the larger sense.