The great one certainly lived up to its billing: Cards 3 — Astros 4

Share All sharing options for: The great one certainly lived up to its billing: Cards 3 — Astros 4

Words are really failing me right now in trying to figure out how to sum up this game, and it's really tough even figure out where to begin.

Chris Carpenter looked like he did four years ago and Roy Oswalt was in command of his arsenal all night, so the pitchers' duel did not disappoint.

Carlos Lee made the weakest throw ever and Ivan Rodriguez dropped it, but everyone will forget about it because Pudge was the Astros offensive spark plug in the 9th.

Dave Clark's judgement calls at 3B had just about everyone sweating bullets (I can't remember ever seeing so many runners held at 3rd) and I am at a loss to try and figure out what was going through Coop's mind in the 9th (Seriously, who brings their closer in the top of the ninth, but then starts off the bottom of the ninth trying to play for a tie?). Thankfully Chris Coste couldn't get the sac bunt down and had to go to his bat because it drove in Pudge, the tying run.

Miguel Tejada battled Ryan Franklin and delivered a glorious walk off 1B after...

Hell, I can't do this game justice, so I'll let FanGraphs tell you the story: 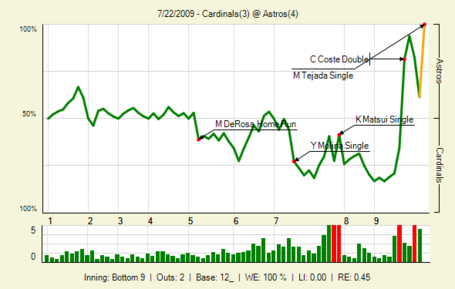 On Monday I said I was looking for an opening statement from the Astros and I couldn't be more pleased with what they delivered.  A series sweep.  Three great games.  All of it to pull the Astros within one game of the Cardinals in the standings.  By far the best series of the year (probably the last three years) and by far the best game I have seen the Astros play all season.  This is why I love baseball.

You really can't ask for much more from this group of guys.