Share All sharing options for: Astros offense explodes, the bullpen implodes, but Wandy still gets the W: Cards 6 — Astros 11

We could almost just go ahead and gloss over the first six innings of this game because it wasn't until the seventh that this one got...interesting is about the mildest way to put it.  Wandy didn't have his best stuff in the first few innings, but he dialed it in to cruise through 7IP and even contributed offensively in what would be an explosive bottom of the seventh.

Let's break it down:

Chad Paronto entered the 8th in what looked like a ball game that was over, but oh it wasn't.  Oh was it not:
The good news in all of that is that it really had no real impact on our odds of winning the game.  Going into the 8th the Astros had a 99.9% chance of winning, and the low point after DeRosa bomb was 97.6%.  See for yourself: 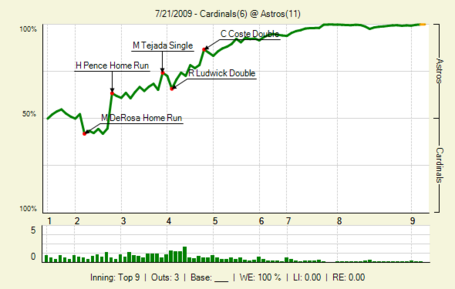 With the Cubs extra inning loss to the Phillies and the Astros series clinching victory (how's that for the keynote address I was looking for?) here's how the NL Central shakes out:

With Roy on the mound tomorrow against Carpenter, the great match-up will have a lot riding on it (we could be one game out!!!!).