This will easily the first time that I won't mind having had to stay alert until 12:20 AM CDT to write a game recap.  The Astros started off the second half of the season in encouraging fashion with Wandy Rodriguez battling through what HLP and I remarked, via phone, to be one widely inconsistent, but wide, strike zone to shut out the Dodgers for six innings.  After that, Tim Byrdak, Alberto Arias, LaTroy Hawkins, and Jose Valverde combined to honor Wandy's effort and slam the door on a shut out on the best team in baseball whose fabled slugger, Manny Ramirez, was back in LA for the first time since his attempt to restart his ovaries landed him a 50 game suspension.

The positives (there will be no corollary negatives):

So yeah, all in all a good night.  The important part is that for the first time in 2009, we're winners.  Drink it in. 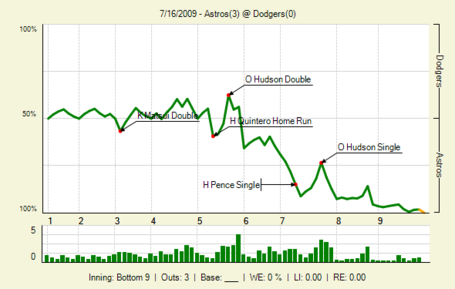