Share All sharing options for: Kaz Matsui's homer takes the Astros back to .500: Nationals 0 - Astros 5

I caught most of this game on the radio, which means I really have no idea what took place, but I do know all 1,357 groups that were out at the ball park.  Seriously, someone needs to tell the radio guys that people listening on the radio don't know what's going on.  I did hear a lot of shouting with Kaz Matsui's home run, though.

In between switching from being frustrated with Milo and the new Wilco album, I did manage to gather that Brian Moehler walked a very, very tight rope en route to his 6.1 IP shut out.  The box score supports my findings, as in 6.1 IP Moehler stuck out two, walked two, and induced twelve ground ball outs and eight fly ball outs.  Moehler clearly scoffs at the idea of defense independent pitching.

My nit picking at Brian Moehler's improbable performance aside, the important thing is that the Astros will go into the break as a .500 team; which is just about we predicted for the Astros in the Community Projection Project.  Whether we'll all look like geniuses come October remains to be seen, but for the next four days, the Astros are a .500 team.

So kick back, relax, and enjoy Hunter Pence and Miguel Tejada in the All-Star break. 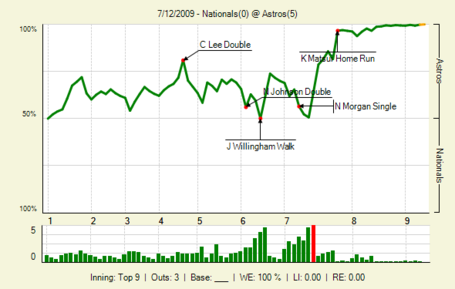 Oh, and kudos for Lance Berkman for taking three walks.

Here are your NL Central standings prior to the results of tonight's game between the Cardinals and Cubs: