Share All sharing options for: Geoff Blum's walk off sends the Astros back to .500: Nationals 5 - Astros 6

As frustrating of a game as this was in moments, there were some truly spectacular saves made by the Astros to recover this game.  Michael Bourn's two outfiend assists and Ivan Rodriguez's diving tag in the bottom of the ninth were both nail biters, but it was Geoff Blum's walk off single that prevented yet another 5-5 extra inning affair from taking place between the Astros and the Nationals.

Up until being pulled from the game with a blister numbness in a finger (thank you All-Star Break), Roy Oswalt was dazzling with 6K, 1BB over his six innings.  Chris Sampson almost became the goat of the game, but Cecil Cooper was able to the pull the right lever at the right time and send Jeff Keppinger to the plate to square off against lefty Joe Beimel.  Keppinger drove in Pudge on a sac fly to left.  Bourn had the opportunity to drive in the go ahead run, but he K-ed against a slider the Beimel finally managed to locate.

Oh yeah, Bourn also hit an opposite field home run.  I can't remember ever watching him do that before (even if it was a Crawford Box homer).  It was truly a stand out performance for the worst everyday player in MLB in 2008.

The only other positive I'll note (though there are several), is that Carlos Lee not only made a running catch early in the game, but he cranked a solo shot homer to lead off the second.

How I could forget? For the first time since April 7th, the Astros are a .500 baseball team. We might not be winners, but we're certainly not losers for the next nineteen and half hours. 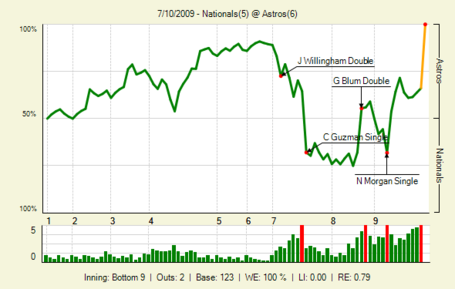 Hello top half of the Central.