Down on the Farm: Polin Trinidad, Bud Norris, and Yorman Bazardo

Share All sharing options for: Down on the Farm: Polin Trinidad, Bud Norris, and Yorman Bazardo

Against the St. Louis Cardinals' AAA affiliate, the Red Birds,  the Express' talented trio of young starting pitchers took to the mound in successive days this past week. Polin Trinidad made his first start with Round Rock, while Bud Norris and Yorman Bazardo continued their strong 2009 seasons.

Sunday, July 5: Trinidad pitched effectively against Memphis, limiting the Red Birds to two runs on seven hits in 6.2 innings of work. He allowed both of his runs in the third inning, and left with the game tied at two runs apiece. Edwin Maysonet got Trinidad off the hook with a two run blast in the top of the fourth inning. Trinidad experienced a great deal of success for the AA Corpus Christi Hooks this season, impressing with his control having walked only ten batters in 82.2 innings.

Monday, July 6: If it were possible to sum up Bud Norris' season in one start, Monday would have been that start. Memphis shut out the Express, allowing the team just five hits. What's more frustrating was that Norris pitched a gem- shutting the Red Birds out in his six innings of work, while striking out seven. He lowered his PCL best ERA to a scant 2.45. While a bit older than many of his counterparts, Norris has performed better than any other starting pitcher this season in the PCL. In addition to leading the league in ERA, he is tops in strikeouts (99) as well. His propensity to allow walks seems to be one of the biggest impidiments to Norris being called up to the big league club.

Tuesday, July 7: Memphis took a broom to the Express, sweeping them right out of town after beating Round Rock 3-1. Yorman Bazardo did all he could though, pitching a complete game in the losing effort. In sum, Bazardo allowed two earned runs on eight hits. His 6:1 strikeout to walk ratio was nice to see as well. The Red Birds had big league pitcher Kyle Loshe on the mound making a rehab start, so I'm willing to bet that made the game a little more interesting for all the Express players, especially Bazardo. After bouncing around a few organizations, Yorman has fit in nicely with Houston.

Both Norris and Bazardo were selected to participate in the PCL/IL All Star Game on July 15th. Nice to see our guys get some national recognition. 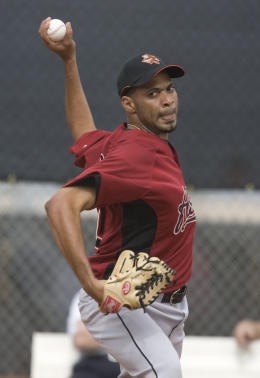