Sorry to have this up so late.  I couldn't bring myself to write it last night because tiredness won out.

Alright, the title is a little non sensical, but David Eckstein was responsible for driving in the fourth run, which put the proverbial nail in our proverbial coffin, did have a 3/4 night at the plate, and was the subject of some of FireJoeMorgan's greatest material.  My attempts to resurect the greatness of FJM aside, Eckstein was worth a game leading .318 WPA for the night, so I'm pretty much spot on.

Yes, Chris Sampson came in and blew a two run lead in what felt like a matter of seconds, but Chris Sampson has also been one of the best relievers in baseball in the this year (that's not a joke either, click here for your proof).  It was probably unavoidable that the game gets tied up, but I think if I'm Coop, I'm pulling Sampson after Tony Gwynn doubles; although, I can't recall if anyone in the pen was warming up. 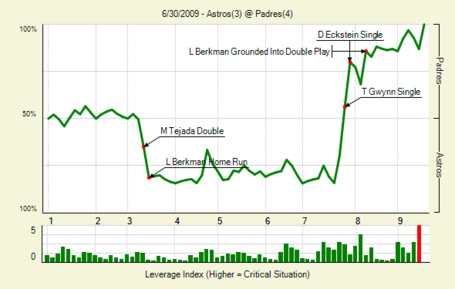