Forgive us, Fathers, for Wandy did Pitch

Share All sharing options for: Forgive us, Fathers, for Wandy did Pitch

What a neat and tidy game that was. The Astros had only nine baserunners tonight, but two of them touched home plate. Hunter Pence battled back from being behind 0-2 to plate Ivan Rodriguez and Kaz Matsui for the pair of RBI.

That wasn't the story though. The story nearly from start to finish was the 30 year old Dominican with the blessed left arm. Wandy putting together a solid season for the Astros this season was imperative to being relevant. So far. So very, very good. Tonight he threw a ridiculous eight innings, coupling seven strikeouts with zero walks. He was John Maynard Keynes: economical. As in, he averaged fewer than fifteen pitches per inning.

We needed a stopper tonight. Wandy has been The Best Pitcher on the Astros, and he definitely deserved that title tonight. I don't know if any team would have been able to do much damage the way Rodriguez pitched. To quote the aforementioned Keynes: In the long run, we're all dead. The long run snuck up on the Padres offense tonight. 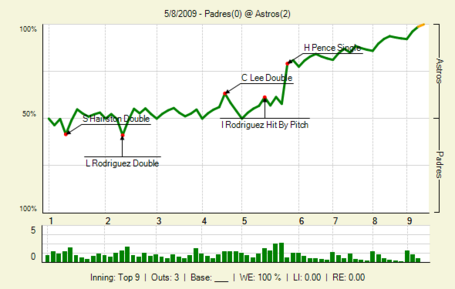