Get back, Jo-Jo! Astros take game, series against Atlanta

Share All sharing options for: Get back, Jo-Jo! Astros take game, series against Atlanta

Braves starter Jo-Jo Reyes was cruising right along after giving up a run in the first inning. Heading into the top of the sixth, his Braves had a 3-1 lead, and things were looking bleak for the Astros. After Kaz Matsui grounded out to Reyes, the offense strung together four straight singles, scoring two runs.  Pudge Rodriguez capped off the inning's run scoring with a sac fly to left, and the Astros stole the lead back from the Braves.

Atlanta would answer with a run of their own in the bottom half of the sixth, and when Houston scored two more in the seventh, the Braves managed to push another run across the board, making it 6-5. Our bullpen was on the tightrope seemingly at every turn, yet yielded only two runs in four busy innings of work. LaTroy Hawkins pitched 1.1 innings to close the game out and collected a save in the 7-5 Astros victory. Geoff Geary was all over the place, but limited the damage in 1.1 innings of work which was good enough for the win.

With runners in scoring position, the Astros were 3/7. Mike Bourn is playing the best baseball of his young career, going 3/4 at the plate with an RBI and 2 SB. Every starting position player besides Jeff Keppinger collected at least one hit, and Kepp was able to contribute with a pair of walks.

This series win in ATL means two straight road series victories for the Astros. A lot of positives in this game. I mean, Carlos Lee even was involved in throwing a runner out at home. Doug Brocail left the game with a leg injury, so hopefully he'll be ok. It'd be a shame to lose him right after he just came off the DL. 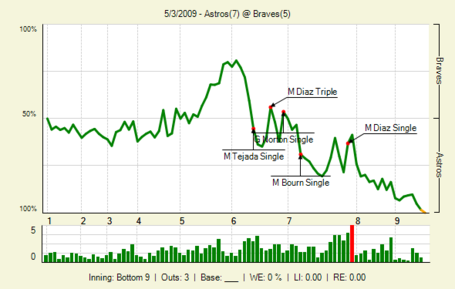