Breaking down Backe: What might he offer the Astros? Part II

So today we're going to delve into some of Harry's proprietary metrics that he uses to analyze pitchers with pitch/fx data.  I have to admit that I'm not an expert on these things, but Harry coached me through some of the analysis of it and I have some definitions straight from the horses mouth to help out everyone else out:

As refresher from yesterday's post, here's what I concluded:

[A]t the macro level, what I see in Backe is that there just wasn't a whole lot of difference in his performances, regardless of the outcomes, when measured this way.

The Chart below is super unwieldy and in spite of a solid two hours of trying to format it in HTML from .xls, I gave up for my sanity's sake and took a screen shot of it.  You'll have to click on it to see it full size, and I apologize for that, but there's a part of me that doesn't.  It's broken down by each pitch and binned for either good starts or bad starts of Backe's in 2008. 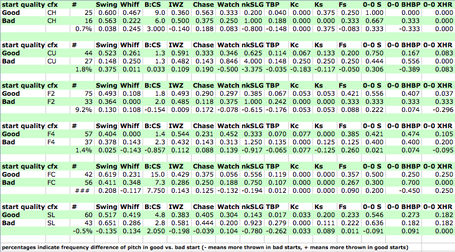 Going pitch by pitch for Monsieur Backe, we saw nothing too different in terms of utilization other than the fact that he used his cutter more in bad outings; something that didn't really hurt him though—curiously.  In his bad outings, his nkSLG wasn't much higher and his TBP was actually lower than it was in the good outings?  Make of that what you will.  Harry's comments on some of the situational stats honed in on the fact that Backe got less strikes on the cutter when it mattered, so it perhaps it was an overuse issue in the end.

The one pride I will take in this study, is that his bad outings saw his curve ball result in a five times higher nkSLG.  Perhaps the hump does have something to do with it, eh? Score on for the home team, I say.

To discuss Backe's four seam fastball, I defer to a direct quote from Harry because it about sums up the puzzlement we felt in dissecting Backe perfectly:

less in the zone, but actually gets whiffs in the bad starts (so, getting guys swinging at four seamers out of the zone is a bad sign??) - gets hit harder though, less chase and watch

Really, that's kind of a puzzling effect.  My one thought is that perhaps Backe just didn't mix his pitches very well his bad outings, resulting in the a lion's share of the 36 home runs he gave up and all those extra bases that nkSLG and TBP is are measuring.

His change up, sinker, and slider all reveal a similar story: better in good starts in terms of outcomes like whiff and chase and then higher nkSLG and TBP.  The slider was notably worse at fooling people in bad outings, and perhaps it could be tied into the poor curve ball.  Something along the lines of: hitter sees a ball with side spin, but doesn't see a hump and the knows he's getting served a slider.  That's just my two cents on the thing in trying to connect correlation with causation...a dangerous task.

With the more nuanced data, some small differences appear, but nothing too great.  In his bad outings, hitters took less swings and misses, but there were also less swings in general.  Backe also saw less called third strikes, induced less fouls (less contact attempting to be made, or at least less bad contact induced...no defensive swings I guess?), and fell behind more often than he did in his good outings.  In his good outings, he averaged a ratio of being ahead in the count of 11:7 to 7:7 in his bad outings.

None of that is really in the chart above, but it was one of the things that Harry noticed.  What he and I concluded from this is that what varied between his stellar outings and his poor outings was the way hitters approached the AB.  We drew this conclusion because, as I stated last time, the way Backe worked, and the way his pitches were accounted for in pitch/fx, Backe wasn't doing much differently.  Thus, Backe it just seemed like hitters were just sitting on Backe, waiting from to make mistakes.  We justified this conclusion based on his increase nkSLG and TBP, both of which were much higher than in his bad outings.  It could simply be that his stuff has such a small margin of error, because it's so mediocre to begin with, that if he's off slightly, he gets crushed.  I lean more the former, but the latter probably either contributes to the former, or has equal merit.

In sum, the pitches weren't that different, what does seem to be different was how hitters approach Backe.  Like I said in the first installment, though, is that these are tentative conclusions, based on biased data, that is relatively small in the statistical sense of significance.  It is, however, enough for me to say this: I'm not going to expect much, if anything, from Brandon in 2009.