Breaking down Backe: What might he offer the Astros? Part I

To start, I want to thank Harry Pavildis for all the work he put into mining the data and walking me through the finer points of it.  I know Harry has probably been wondering when this would ever turn into a TCB story, but I wanted to sit on it until the decision for Backe would reach critical mass because I think what this has to offer, is probably one of the key pieces of the puzzle.

In his six rehab outings, Backe managed a 2.70 FIP in four starts at AA and a 3.30 FIP in two starts at AAA.  His K/BB were a less than exciting 2.43 at AA and 1.33 at AAA.  While the FIP's are solid, his peripheral stats don't speak to dominating stuff, especially when squaring off against minor leaguers.

To preface this, this is pitch/fx intensive and it involves a fairly limited sample size of pitches from Backe's 2008 season in some areas.  The conclusion that will be developed can provide insight, but nothing in the way of proof; merely food for thought as the Astros front office decides whether or not Brandon Backe warrants a chance to be a big league starter again.

With the preface out there, and a lot of fancy charts, tables, and graphs to explain, I'll leave those of you who want to dig through it to make the jump.  This first post deals only with macro data from 2008, and will serve as a set up for tomorrows, more in depth discussion of Backe's flukey performances in 2008.  While that disclaimer makes it sound like this post in boring, I think that most of us will find that the data discussed to be rather illuminating and hopefully conversation worthy.

About a month ago, I contacted Harry, who is a pitch/fx guru, and asked him if could sort out Backe's, Good, Bad, and in between starts to see if there was something about his approach that differed from in those outings.  The hope was that there would be some sort of discernible difference between them that indicated Backe's flashes of brilliance last were more than just luck or some sort of statistical randomness that just played out that way.

The table above are the averages for Backe's pitches throughout 2008.  pfx_x is the horizontal movement on his pitches as measured from the center of home plate.  A negative value indicates that a pitch would break in on a right handed batter.  pfx_z is the vertical movement and measures the same thing, but the plus and minuses are pretty intuitive: negatives indicates a downward break, whereas positives mean that the pitch rose higher than it would have if didn't have any spin.  rpm indicates the revolutions per minute of the pitch, physics tells us, and the chart above confirms, that the greater the rpm, the less vertical break a pitch will have.  Having spent a fair amount of time reading up on pitch/fx studies, I'll be the first to admit that this table doesn't contain the data of an ace.  All of his stuff seems to be in the vicinity of mediocre.

To give you some visual on the charts, here are some visualizations of Backe's repertoire:

In the averages, we can see that hump in his curveball I once wrote about, but for the record, it doesn't seem to play a very large role in what Harry or I saw in the data, but I still hold to the idea that his curve ball staying in the same plane as his other stuff is pretty important.

To get a better idea of where Backe is in terms of the strike zone, Harry mapped each individual pitch, and then averaged by type, in a relative grouping, the Backe's pitches in 2008: 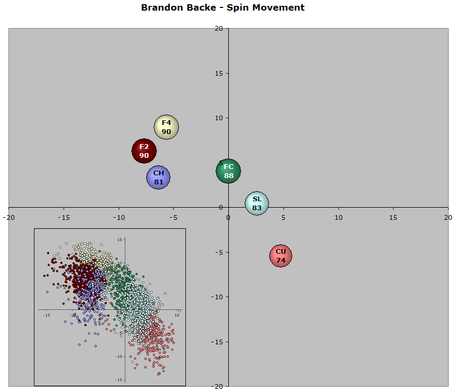 Ok, the averages are out of the way and it's time to get to the reason you're actually reading this: what can Harry's data mining tell us about Backe.  The next two charts are vertical and the horizontal break downs of the strike zone and are useful in trying to determine whether or not there was a significant difference in Backe's approach in his good, bad, and in between starts: 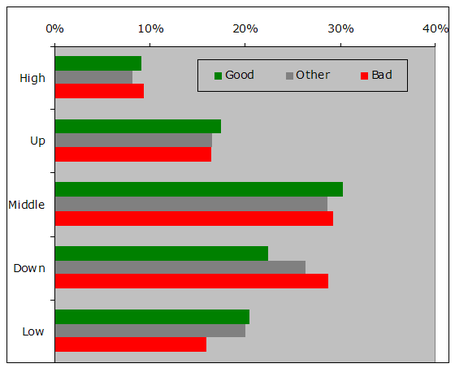 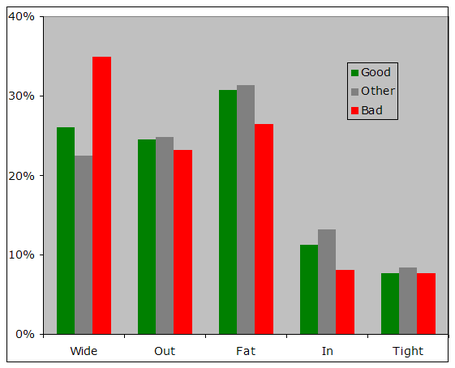 These charts represents the total number of pitches that Backe threw in 2008 in their respective areas.  The vertical layers don't reveal much of a pattern change in terms of Backe's approach other than him being lower in the zone in bad starts, but the horizontal slices of the plate show he missed more wide, and pitched less inside during his poor outings last year.  However, he countered the extra misses wide by decreasing his rates everywhere else in the zone in bad starts, relative his other outings.  The thing to note here is that Backe really didn't vary his approach, too much, in 2008 good or bad or in between.

This seems like enough for today, and while there wasn't a whole of nuanced digging, at the macro level, what I see in Backe is that there just wasn't a whole lot of difference in his performances, regardless of the outcomes, when measured this way.  So that I don't spoil anything for anyone, I'll hold off and letting you know whether or not this changes when we employ some of Harry's more advanced metrics for pitch/fx data.