Yovani and Wandy: What the Astros and Brewers can expect tonight

Share All sharing options for: Yovani and Wandy: What the Astros and Brewers can expect tonight

Starting pitchers are like goalies in hockey, or quarterbacks in football: they are often times the headlining matchup going into games. The blame or credit for a win/loss befalls these athletes moreso than any other player. Hell, what other athlete in a team sport gets a win-loss record? So when pitchers like Yovani Gallardo and Wandy Rodriguez compete against one another, it bears taking a look at more in an in depth fashion.

For Milwaukee, Yovani Gallardo has made a seamless transition from young starter to young starter cum pitching staff ace. There are a lot of variables for every team when a season begins, but few teams had the obvious questions that Milwaukee did. How the team would cope without Ben Sheets and CC Sabathia was extremely important to whether or not the Berwers could remain competitive. So far, so very good. Gallardo has upped his K production and excelled in limiting walks- a particularly difficult task for young starting pitchers. Our own starting pitchers could stand to learn from Gallardo and his ground ball inducing ways.

In his last start against the Astros, Gallardo pitched a complete game allowing two runs and striking out seven. He mixed a good fastball with movement with a change up and curveball that were around the strikezone more times than not: 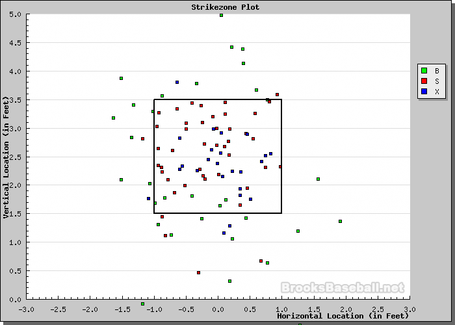 Throwing that kind of ratio of balls:strikes in a game gives the pitcher a decided advantage over hitters. Gallardo only started off ten Astros with a ball on April 29th, re-inforcing a strength of his: getting ahead of hitters and limiting hard hit balls.

Wandy Rodriguez has statistically been very similar to Gallardo so far this season. He too has limited the fly ball, and struck out a high rate of batters. Where he has excelled past the likes of Yovani is in his control, though that is to be expected given Wandy's advanced age and experience. A sort of anomaly that has worked to Wandy's advantage is the fact that he hasn't allowed a home run yet this season, despite having a higher FB% this season compared to last.

Against San Diego on May 8th, Wandy was spectacular in throwing eight shutout innings, allowing five hits and striking out seven. What was particularly impressive was the fact that of his 116 total pitches thrown, 82 were strikes. That 82:34 ratio if nothing else meant that he was going after a team of struggling hitters: 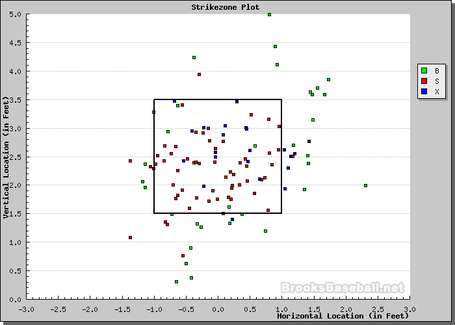 Both Milwaukee and Houston began the season with significant pitching questions. So far, each club has addressed their issues to an extent. While Milwaukee has seen their whole rotation step their games up, the Astros have yet to see that sort of across the board uptick in performance. Each club's youngest starter has pitched extremely well, ensuring that at least once every five days their club is competitive.