In rain or shine, Astros deliver the win, 5-1

Share All sharing options for: In rain or shine, Astros deliver the win, 5-1

This was a win that everyone contributed to:

Roy Oswalt pitched only one inning, as a quintet of relievers: Paulino, Byrdak, Sampson, Brocail, and Hawkins, closed the game out. One run was allowed in eight innings of work. That's a shot in the arm for a struggling 'pen

Lance Berkman got the Astros on the board early with a solo shot to left. Second day in a row he's gone to the opposite field for a hit. Maybe he's coming around a little?

Three of our five runs were scored with two outs.

Tomorrow is a winable game as well, with Wandy on the mound against Braves starter Jo-Jo Reyes. 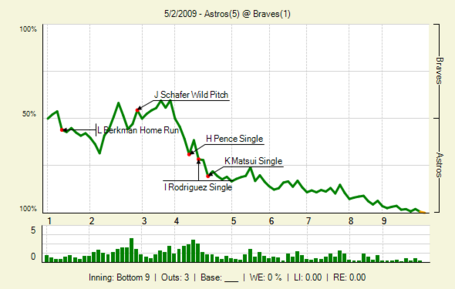