Excellence in Broadcasting: Jim Deshaies as a Major Leaguer

Share All sharing options for: Excellence in Broadcasting: Jim Deshaies as a Major Leaguer

I may be in the minority on this one, but after listening to JD call games for the Astros for all these years, I had never actually wandered over to Baseball Reference to see what kind of pitcher he was in the big leagues. His career, which began in 1984, was largely before I was old enough to truly start following baseball. When I took the time to peruse his career lines, I was impressed at what I found.

What made me think of making a post about JD was a discussion he and Bill Brown had this past Wednesday. The subject of BABIP was brought up, and JD went on to explain how BABIP and luck play into a season. I was watching the game with my sister, who isn't at all clueless when it comes to sports, but doesn't follow baseball religiously either. She was pretty inquisitive though, asking me more about what our two commentators were talking about. I could never remember a time that any commentator had made someone I was watching a game with spontaneously ask a question about a pretty in depth area. That alone made me appreciate JD and his astuteness.

Does anyone have any memories of JD pitching in the majors? Was he a colorful guy? A good post-game quote? 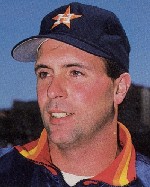