Mr. Rodriguez is now approaching the status of being a near-ace. Not Johan, Lincecum, Greinke territory, but pretty close. Eleven strikeouts, zero walks. That makes eighteen strikeouts and zero walks in his last fifteen innings of work.

Michael Bourn had two steals and four hits. He wasn't the only Astro showing off the wheels, either. Carlos Lee made like a dump truck in stealing his first bag of the season. He also did what he does best, hit the baseball very, very hard. El Caballo connected for his seventh long ball of the young season. Hunter Pence and Ivan Rodriguez both continued their torrid hitting ways, collecting two hits apiece. I guess Pudge felt left out after not being in the lineup on Wednesday?

A weekend series in Chicago to face the Cubs awaits. I don't much care for those boys, but playing where the ivy grows is always entertaining. Brian Moehler takes the ball tomorrow, with Roy O and Felipe closing her out. Two games under .500. May was good for us in 2008, and hopefully we make it even better for us in 2009. 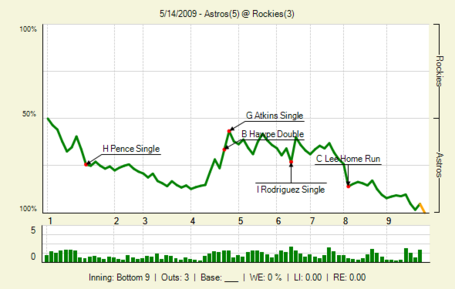