Keppinger a hero in his first Astros Game; Astros get first win of the season

Share All sharing options for: Keppinger a hero in his first Astros Game; Astros get first win of the season

The picture on the left will lead you to a glorious slide show of sultry AP-licensed photographs from tonight's game (give a hearty thanks to the tech team and network management for making this possible).

Wandy pitched phenomenally through six innings; Sampson was nails in his inning; Hawkins finally give up a run as an Astro; and we displayed uncharacteristic (from last year) patience at the plate.

As AstrosAndy pointed out in the comments of the Game Thread:

If we're going to actually accomplish that feat, here's a laundry list of: 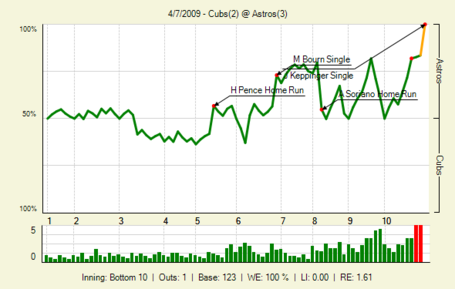 Topsy-turvy baseball, I like it.  Keppinger's broken bat single came at point in the game we're that final run was worth the equivalent of 5.53 runs in the forth (tons of leverage) and capped the final 16.4% of the Win Expectancy necessary to win the game.  Not a bad way to arrive.