The picture pretty much keys in on where our day went wrong.  A few opening mistakes from Roy and things went south.  I hope this isn't an indication that he'll be suffering from the WBC-itis that plagued starters after the 2006 WBC. It looked like he was missing his spots pretty consistently, at least early on. Leaving pitches up in the zone against hitters like Alfonso Soriano and Aramis Ramirez usually spells disaster- and it did tonight.

The WPA graph below pretty much hammers that home for us.

What can we take away from tonight's game? 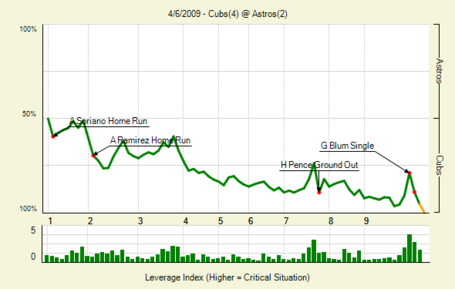