A few near certainties held tonight against Cincinnati:

Lance Berkman did his part, delivering a solo home run in the sixth for the first run of the game

Johnny Cueto, to his credit, took the Reds and their recent struggles against the Astros at the GABP on his back, and delivered a similar line to that of Oswalt: seven innings, one run.

What had been a pitcher's deul was broken up in the top half of the ninth when Carlos Lee led off the inning with a dying quail into right field. Miguel Tejada followed with a smash single through the SS-3B hole to put two on for Hunter Pence.

Taking a page out of hitting coach Sean Berry's playbook, Pence crushed an opposite field double into right field, scoring both baserunners. Reds right fielder Jay Bruce fumbled the ball in the outfield, allowing Hunter to take third. Geoff Blum scored him with a sac fly, putting the Astros up 4-1. 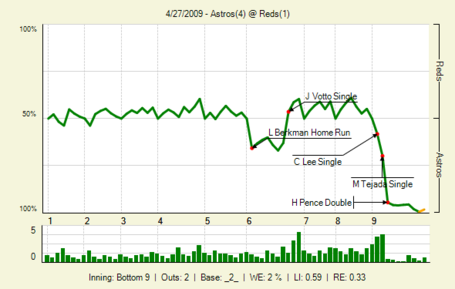