Could LaTroy Hawkins be the future Astros closer? (part one)

Share All sharing options for: Could LaTroy Hawkins be the future Astros closer? (part one)

I know, it souns a little silly, but AstrosAndy made a very good point that I'd like to expand on and investigate in last night's game thread.

The more I think about it the more I like the idea of giving the ball to Hawkins a little more often in 9th inning situations.

Valverde could very likely be way too expensive for us next year, and it’d be nice to know if Hawkins can step in as closer. I know some people have mentioned that Hawkins hasn’t fared too well as a closer before, and I don’t have the working knowledge of things like leverage stats to actually investigate this.

I know that just looking at traditional statistics, Valverde has been a better pitcher than Hawkins, but I’m wondering if the drop in quality would be justified by the cash savings…especially if we were able to use that cash to beef up other areas of the team.

I want to explore the leverage idea, but I want to look at something that I've really credited the Astros scouts with in the Hawkins acquisition before I make my brain hurt interpreting leverage indices:

Our report on him is his overall numbers don’t look all that great right now. Our reports on him over the last month or so (say) he’s gone back and thrown more of his four-seam fastball. His velocity has been good.

Let's look at that claim, after the jump.

The wonderful folks at FanGraphs actually have everything I needed to make some objective judgements about Hawkins legitimacy since joining the Astros.

With their new pitch/fx numbers and graphs, we can check the scouts' claim before we jump into the trickier leverage discussion at a later date.

First off, let's look at the velocity on Hawkin's fastball that allegedly is helping regain his former status as a legitimate late innings guy. 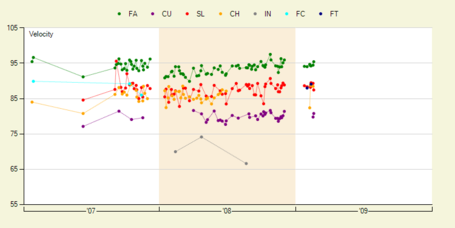 There is definitely a gradual trend upwards in his fastball's velocity throughout the course of 2008, and perhaps that added velocity gave him confidence to reach back and throw it.  Either way, a lose oberservational correlation exists between increased fastball velocity in 2008 and success.  To put specific numbers to it, Hawkin's fastball's average velocity with the Yankees was 92.5 MPH, but with the 'Stros it was 94.4 MPH.  That's a lot of speed to add.

But did he actually use it more? 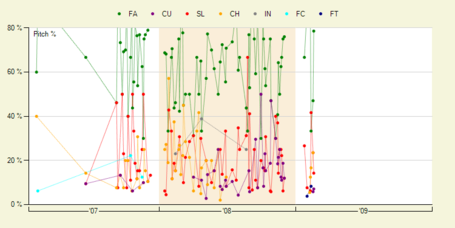 This chart is a little more hectic, but after staring at it for a solid ten minutes, I finally came to the conclusion that most of his outings in the second half are all ridiculously high on fastball percentage relative to the first half.  It's fuzzy, but I think it's there.  The numbers on the split, however, are 63.8% with the Yanks, and 62.7% with the 'Stros (proof that subjective judgements are problematic).  Take from that what you will because average isn't the best measure of central tendency, and the graph is tough as nails to make heads or tails of (two analogies, one subject).

The only other change I can observe between the first and second half is that his horizontal velocity starts to drift back in towards the plate, but not too much.  It seems like that would enable him to keep righties guessing on the inside pitch, and make that outside corner all the more tantalizing, but not quite juicy enough, for lefties.

(as a reference point, 0 is the center of the plate, negative is in on righties, and positive is out on righties) 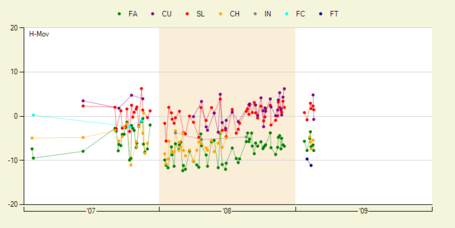 Not much, if anything changes vertically; so I'll spare you the laborious to read graph.

Something seems to have changed on Hawkins fastball and seems to have used it to his advantage in 2008.  So far, so good for Hawkins in 2009—which is good. Hawkin's success could be a huge cost savings for us.  Not only could he likely be signed to a fairly reasonable contract compared to a potential free agent closer, but even more important: someone we'd acquire through a**GASP**trade.  Further, it would buy a little more time before Bud Norris to become the closer in waiting—allowing him get some less stressful appearances at the big league level.  Perhaps Hawkins and Norris could be the new Dotel and Lidge?