Another W against a good Los Angeles club. Roy Oswalt was great for five innings, then he had his troubles in the sixth, giving up bombs to Manuelito, Andre Ethier and Casey Blake.

The Astros responded immediately, with Jason Michaels knocking in Lance Berkman and Carlos Lee with a double in the sixth. After taking the lead 5-4, the Dodgers failed to hold off the Astros charge again, as Lance Berkman and Ivan Rodriguez keyed the rally with RBIs.

LaTroy Hawkins disposed of LA in the ninth in 1, 2, 3 fashion.

Tomorrow is our first chance to bring out the brooms in 2009. Wandy takes the ball. Death by curveball for the Bums, methinks... 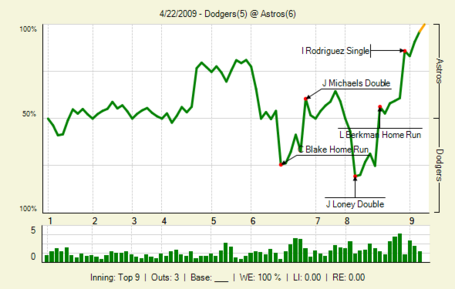 A complete post game wrap can be found here.