Astros trump the Dodgers, but at what expense?

Share All sharing options for: Astros trump the Dodgers, but at what expense?

I didn't get to see all of tonight's action as I bounced around from meeting to meeting, but the parts I did see were encouraging...well if you discount the fact that I think Valverde has a broken bone somewhere on his right leg.

Ortiz had luck on his side as he battled through is five innings, allowing just the three runs in the first, but escaping danger on his 5 BB to 2 K.  Luckily the fielders backed him converting his 11 Ground Outs.  Hopefully Ortiz will continue to adjust to his normal life as a starter and continue to provide solid outings with less free passes.

Kershaw finally came back down to earth tonight, and I think there was not better signal of that then the ball that Carols Lee absolutely tattooed onto the rail-road tracks in the bottom of the 3rd.  Jeff Keppinger continued to do what we traded Drew Sutton away to do—crush left handed pitching, and the rest of the offense just clicked tonight.

Jeff Fulchino let things get interesting for us, and I look forward to Doug Brocail's rehab starts being over and done with.

The real story is whether or not Jose Valverde will be healthy or not after his gutsy performance tonight.  I'm not sure what I'm more impressed by: Gutting it out after taking a ball to a face last year? Or gutting it out on one leg tonight?  As impressive as his performance was, I'm genuinely frightened to find out his diagnosis.  I don't blame Coop for keeping him because Coop really had no other options, and I get the feeling Valverde was insistent on continuing and that the trainers signed off on it.  Also, whatever damage had been done, had been done.  I just truly, truly hope he'll be OK.

Come back tomorrow as the Astros attempt to go on something called a winning streak.

Box Score and Dodgers recap can be found here. 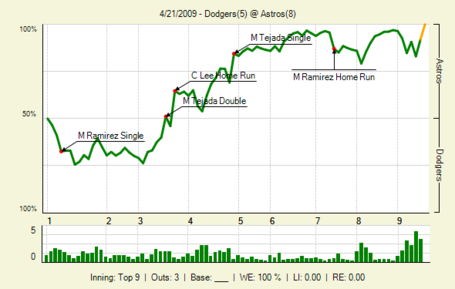