The fourth installment in this series is one that pits an interesting team, the Nats, against the Astros in both teams final series before the All Star Break.

Washington should be a much improved club this season, after bringing in, rather than shedding talent in the off season. Pitcher Scott Olsen, and Outfielders Adam Dunn and Josh Willingham are all positive contributors. One of their best offensive players, Nick Johnson, is oft injured but talented at getting on base, and hitting for some power. Adam Dunn is the opposite of Nick Johnson, in terms of staying healthy.  His consistency would make Joe Morgan proud:

The top of their order, with Lastings Milledge, Elijah Dukes, Ryan Zimmerman and Cristian Guzman in addition to Johnson and Dunn is above average. Second base will be a platoon situation it appears, with Willie Harris, Ronnie Belliard and Anderson Hernandez splitting time there.

Their pitching staff (like many teams) is the Nationals biggest question mark. John Lannan and the aforementioned Olsen are ok to pretty good starters, and rookie Jordan Zimmerman has star potential. Outside of these three, a collection of journeymen fills out the staff. 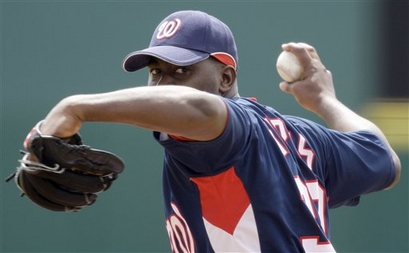 PECOTA, on the strength of a strong team OBP, projects the Nats to finish 77-85. A lot of things would have to break their way for this to happen, but if their pitchers can perform reasonably well, and their offense can stay healthy, that record is possible. This is still a series that the Astros should win. Four games against a team that  has struggled mightily on the road in their history:

It could be a slugfest at the Juice Box, and should be a series win for the Astros.