There are roughly two things I want to point out after this loss.

1) There were several high leverage situations that faced the Astros today, and time after time, the team failed to one degree or another to take advantage of them. Lance Berkman on two separate occasions, and Ivan Rodriguez in his only AB of the game weren't able to get the job done by scoring runners on second and third. Here's graphical evidence of our team's collective ineptitude: 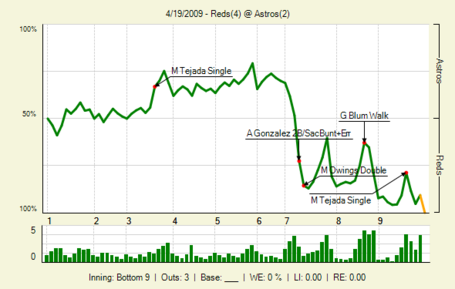 2) Point two is really just a continuation of point one: the Astros left 24 men on base today. Not two, not four, twenty four. This statistical improbability of this is dwarfed only by the team's inability to do anything offensively. Don't get me wrong, it wasn't just the offense that screwed the pooch today. Chris Sampson, Geoff Geary and Tim Byrdak all gave up runs. It's a shame though, that as well as Felipe Paulino pitched today, he wasn't able to record a "W".

Box Score and Recap from the Reds Reporter, here.