This was a complete game. No, Wandy only went seven innings. It was complete dominance by our Astros. The team excelled in all facets of the game, and for one night at least, it was our turn to be on the right side of a laugher.

As the headline indicates, Mr. Rodriguez was a man amongst boys: 7 innings, 2 H, 2 BB, 10 K. He had all of his pitches working, and finished with a 69:36 ball to strike ratio. Laynce Nix wore the most golden of sombreros, stirking out three times in three ABs before being taken out in a double switch. Wandy's curveball, it seems, was especially lethal: 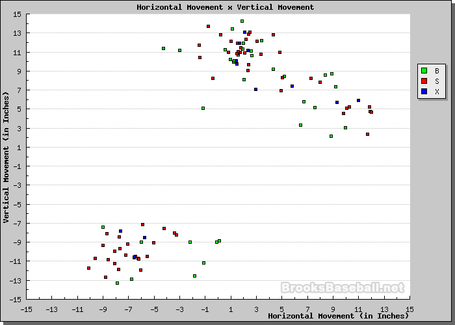 Those blips at the bottom left are the curveballs that he threw. Approximately 2/3 of them went for a strike. His curve is one of the best in the game, or at least some guy named Nolan Ryan thinks so. Chris Sampson and Jeff Fulchino pitched the eighth and ninth innings respectively to preserve the shut out.

Offensively, Geoff Blum, Carlos Lee, Hunter Pence and Pudge Rodriguez all had at least two hits, and combined for all seven of the Astros' RBI. Lance Berkman went hitless, but did walk and score a run.

Felipe Paulino will take the ball today in yet another rubber game for the Astros early in the season.