Everybody. Stop reading this post. Do it. Stop right now. Remember this feeling? Winning baseball series? Sure you do. September 25, 2008 seems just like yesterday...Well, since we haven't won a series since that date, you'll be forgiven if the feeling of winning baseball isn't all that familiar.

Leave it to the Pirates of Pittsburgh to bring back that sweet sensation. Russ Ortiz and four relievers combined for a 6-3 victory in the rubber game of this early season three game series. It looked like it was going to be another long day after the Pirates jumped out to a 2-0 advantage after one inning. Adam LaRoche, a.k.a Bert from Seasame Street, a.k.a. Uni-Brow Grand Slam hitter extraordinaire, hit a run scoring double to close out the scoring in the opening frame.

Hunter Pence and Lance Berkman both manned the torpedoes and fired long balls into the galleys...Russ Ortiz chipped in with an RBI single, scoring Jeff Keppinger in the fourth inning. In general Pirates starter Jeff Karstens was wild, and for a control pitcher that usually spells disaster. It did today, and the Astros were the eager beneficiaries.

A series victory. We'll take it. Three games against Cincinnati are upcoming at the Juice Box. Avast ye mateys: a winning streak thar be! 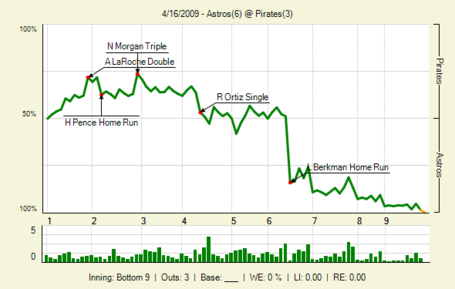