Well, now. Is that the Mike Hampton everyone remembers from the good ol' days?? Striking guys out left and right? Extinguishing the embers of any potential rally? If nobody thought Mr. Hampton would be able to reach back a decade and harness those skills, well we were wrong.

The first inning was where we struck hardest- with runners on base, the Astros stepped up to the plate and got the runners home. Sac flys from Carlos Lee and Hunter Pence plated Michael Bourn and Miguel Tejada. The team didn't look back after that.

Pirates starter Ross Ohlendorf struggled in his five innings of work, giving up four runs on eight hits. The usually hard throwing righty, struggled with his fastball velocity, and was hit hard as a result. Which was good, because for the final four innings of the game the Astros were held hitless.

Tomorrow Russ Ortiz will make his first start of the season, and will face Jeff Karstens. It will be our second chance to win our first series of the season in a rubber game. 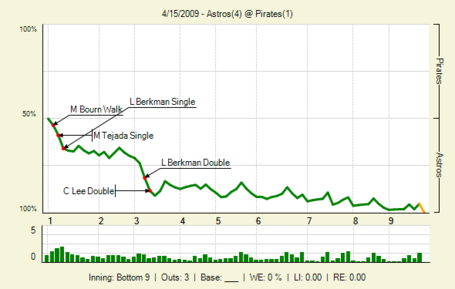