Astros Minor League Notes: My day at The Dell Diamond

Share All sharing options for: Astros Minor League Notes: My day at The Dell Diamond

The gracious folks at the Round Rock Express provided me a press pass and let me roam around the park for tonight's match up of the Omaha Royals vs. The Express.  To say it was an awesome experience is an understatement.  A very special thanks to the people in the Media Relations department who showed me around and help me get acclimated in the world of legitimate baseball journalism.

I didn't spend too much time in the club house but I did get to ask JR Towles some quesitons, and I also got to take some pretty cool photographs during the early parts of the game when the lighting was good.

But all of that after the jump.

I'll start with the juiciest bit of my day. Luckily, I caught JR in the corner of the clubhouse and he was gracious enough to answer a few questions before he and Felipe Paulio went out to warm up.

DQ: So, it's your second time around at AAA, what are you looking to accomplish with this season?

JR: Well, get back to the big leagues.  Work on my swing and get everything right.

DQ: Alright, you're working on your swing, how do you feel that's coming along so far.  I know you've hit well in the first few games.

JR: I mean I'm seeing the ball well and I'm putting some good swings on it, and that's all I can do; just hope things continue to go the way they are going.  Go work hard every day and go out there and see what happens.

DQ: Ok, what stat do you look for, in your personal stats, that tells you you're doing a good job at the plate [personal note: I had to ask it].

JR: You know, I don't look at any stat really.  I just look at how I feel and if I'm seeing the ball well and if I'm putting some good swings and hitting the ball as hard as possible. Just trying hit the ball hard constantly and when I do that, good things are going to happen at some point.

Not the longest interview ever, but I got the sense from talking—briefly—with Towels that best word to describe him is determined.  He just had that air about him every time I saw him.

In his first AB tonight, Towles looked comfortable at the plate and took some good pitches that he picked up on as balls.  His other two ABs I wasn't as close for, but in his hitless night I will say that was making solid contact with the balls he put in play. Brian Bannister was on the mound for the Omaha Royals and he was mowing down the Express line up and constantly pulling the string alternating between his fastball and his curveball; which why I so impressed with Towles during his first AB.

Felipe Paulino had a solid outing, but what concerned me was his seeming inability to locate his off speed pitches for strikes.  His fastball hovered around 94-95 and the park radar recorded several pitches at 96—even one at 97.

The game was pretty much a pitcher's duel with Paulino finally having his no hitter broken up in the fifth inning after a two out single and a two out double found gaps in both the infield and the outfield respectively.

The Express finally got on the board in the eight after some small ball on Matt Kata's part moved Maysonet, who had just hit a line drive double, to third was.  Kata's sac bunt was followed by a Yordany Ramirez scorched single between the first and second basemen.  As a side note, Ramirez is easily the fastest baseball player I've ever seen—EVER.

Things got dicey for Jermey Johnson in the top of the ninth, but he survived unscathed.

After a Manzella fly ball got over the head of the Royal's left fielder, Lubanski, who was playing him absurdly in, Mark Saccamano shot a ground ball up the middle to score Manzella and earn himself a walk off single.

All in all, it was a great game to watch, just because pitching duels move quickly and keep you on your toes waiting for someone to blow it.

The only thing I noted that was disconcerting was two errant throws by Tommy Manzella (one of which almost hit me while I was taking photographs).  That, and it seemed like a lot of our guys were squaring up to bunt at random times.

Pictures are supposedly worth a lot of words 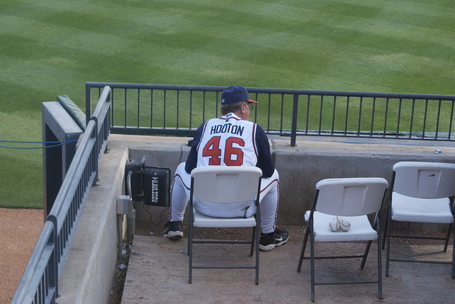 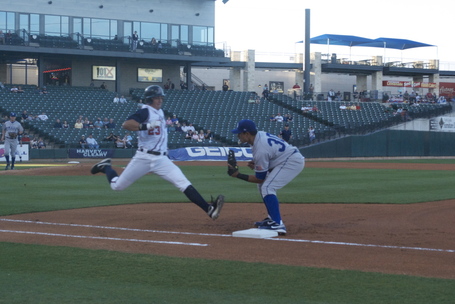 Bogusevic tries to stretch out a bunt attempt 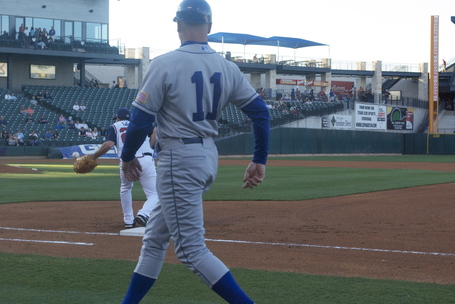 The misplayed/misthrown that hit about two feet from me 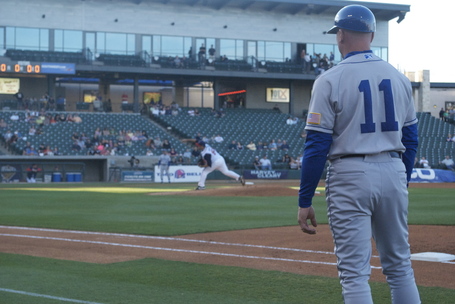