Share All sharing options for: And the Beat(ings) go on: Astros lose fifth in a row, 7-0

By the looks of the data, this game was over almost before it started. Brian Moehler was atrocious, again. He may be injured which would explain his poor performances early this season. Still, that doesn't make this loss any more bearable.

Moehler's struggles are magnified in the loss today, as another starting pitcher went the distance against the Astros. Zach Duke carried the flame today, and it wasn't with overpowering stuff, or great command. The Astros just looked out of sync offensively, swinging at bad balls, and rarely making good contact.

In a game that saw the Pirates trot out their best lineup, and the Astros play a few reserves, it's painfully obvious this team will struggle in games where our starters will be rested. Humberto Quintero is not a major league baseball player, plain and simple. Jason Michaels got a hit today, but he is not a great defender. Playing him in centerfield on days when the Astros face left handed starters will hurt our defense tremendously. Pairing Michaels and Carlos Lee: I have visions of doubles dancing in my head.

Starting pitching and bench depth were two concerns going into spring training, and this game points out those weaknesses. 1-6 is a rough way to start the season. True, there are 155 more to play, but unless the starting pitching improves, there is not much reason to be optimistic about this team's chances to play competitive baseball. Tomorrow is an off day. I can't decide whether or not to be excited or sad. On one hand, it gives the team a day to recoup, on the other, the sour taste of five straight losses is allowed to permeate for an extra day. 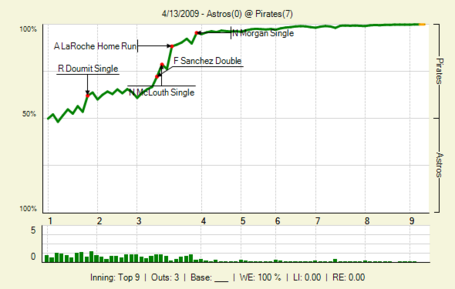