What does Jeff Keppinger mean for the 2009 Astros

Share All sharing options for: What does Jeff Keppinger mean for the 2009 Astros

Yesterday was another one of those big news days for the Astros.  To be honest, I didn't think we were actually going to make a move for a stop gap platoon at 3B in the wake of Aaron Boone's heart surgery.

My initial reaction to Boone's announcement was that it would be foolish to trade for a 3B.  I thought the price would be too high, and Drayton would order Ed Wade to make a short-sighted trade, anyway, out of desperation to keep up the appearance of a contender.  I softened to the idea of a trade after we tossed around a few names, and some cognitive dissidence blurred my rationality on the issue.

While we don't know whether the Reds will be demanding be cash considerations, or who the PTBNL (I love that acronym) could be, it doesn't seem like Jeff Keppinger will cost too much.  Kudos to you Edward Wade, you manage to make these slick, underrated moves often enough to suit me.

Like with the Pudge signing, once the exuberance settled down—and my insomnia needed something to fill the time—I started pondering how much better this trade could make the Astros in 2009.

After the jump, we'll do some very basic, rough math, and then discard it and speculate wildly.

Ok, so here's how I'm approaching this.  I averaged both Boone's and Keppinger's wOBA projections on FanGraphs.  That's five separate projections, so we cover the gamut of pessimism and optimism for both players (I would have included PECOTA if weren't too lazy to calculate their wOBA's by hand).  Boone came out to a .312 wOBA and Keppinger a .330 wOBA (both were rounded up because they ended in .0006).

Using the formula, wOBA - lgAVGwOBA / 1.15 x PA and the 275 PA we allocated for Aaron Boone in the community projection project, I arrived at the Batting Runs Above Average that Keppinger brings to the team: 4.45 Runs.  Nothing to scoff at, but nothing to get all giddy about either.

Because I was too lazy to work out the fielding by hand (my T1-83 is dead), I just replaced Keppinger for Boone in the community projection project, and assumed perfectly average defense for Keppinger—nothing more, nothing less.  Aaron Boone, after taking defense, base running, positional adjustment, and hitting into account was projected to be .1 WAR...or pretty much replacement level.  Jeff Keppinger, on the other hand, came out to .8 WAR.

But does this really measure what changed?

The answer to that is a distinct, no.  Blum and Keppinger will fill the platoon that was originally supposed to be Blum and Boone, so we haven't measured the difference.  Unfortunately, projections don't project platoon splits, but we can compare Boone and Keppinger's career platoon splits to see what shakes out.  This very qualitative observation will allow us only to guess who will be the better platoon mate, and therefore, whether that .7 WAR difference above undersells Keppinger.  (For those of you who are curious, Blum comes out as .3 WAR...)

Here is Aaron Boone's career wOBA platoon split for L/R.  Blue is left, Red is right, and I've never figured out what green is: 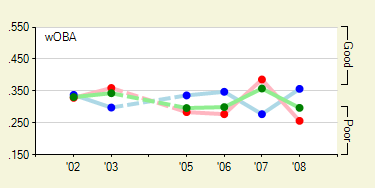 There's not a huge platoon split there, which was one of the criticisms of the original platoon.  Generally though, the max platoon effect we could have expected was about a .350 wOBA, maybe a little more this year. 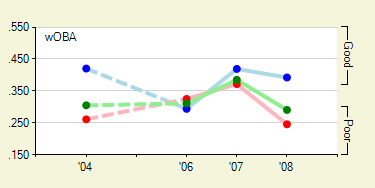 With the exception of '06, Keppinger has demonstrated a distinct advantage against LHP pitching.  Eyeballing the graph, I'd say the average is about .375-.380 wOBA; again, maybe a little more this year because he is specializing.

If we give Keppinger .375 as our best guess LHP wOBA and Boone .350 (stacking the cards in favor of Boone to be conservative), then the run differential becomes, when we reapply the above formula: 5.98 Runs on the left side.  That's another run and half above the real projections.  The grain of salt to this, is that these aren't legitimate projections; these are merely here to demonstrate that Keppinger is a platoon-mate than Boone would have been.

In reality, the ceiling on this move, if Keppinger plays slight above average defense and hits for a strong platoon split, at most, is a win (so many commas, I need to work on that).  I think Ed Wade should be applauded for this, though.  A win at the expense of a league minimum contract, and hopefully just a few hundred thousand more is a steal.